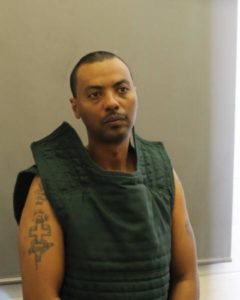 Final Update (noon) — According to the Fairfax County Police Department, Assaye has been apprehended in southeast D.C., during a traffic stop, without incident.

Update at 10:00 a.m. — Per a police broadcast, the vehicle referenced below has been found but Assaye remains at large. He has reportedly carjacked another vehicle, a dark gray Hyundai Elantra with the plate XTU-5024. It was last seen in the area of Little River Turnpike in Annandale.

Earlier: Wossen Assaye, the bank robbery suspect arrested by the FBI in Arlington on March 20, has escaped from a hospital in Fairfax County.

Police say Assaye was at Inova Fairfax Hospital after an apparent suicide attempt. Early this morning he reportedly overpowered a private security guard, took his gun and escaped. A shot was fired during the struggle but no one was injured.

Police say Assaye, who’s 6’0″ and 170 lbs, stole a silver 2002 Toyota Camry with Virginia tags XZP-8513 and is still on the loose. He was wearing nothing but a hospital gown at the time of his escape. According to Reston Now, the hospital has been placed on lockdown.

On March 20, Assaye was apprehended at his father’s apartment at The Carlin retirement home in Buckingham. Police say Assaye may now be on the run with his girlfriend.

Assaye is suspected of robbing a dozen banks, making his escape from the robberies on a bicycle. Arlington County issued the following alert about Assaye’s escape this morning.

Early this morning a prisoner, being guarded by a security officer, managed to escape from Inova Fairfax Hospital. The suspect is Wossen Assaye, a male, 6′, 170 lbs who was last seen wearing a hospital gown. The suspect is armed and considered dangerous. Please use an abundance of caution and check with your local news for additional information and a photo of the suspect.