The 105-year-old Wilson School building isn’t historic enough to be preserved, the Arlington County Board decided on Saturday.

Instead, Arlington Public Schools has been directed to incorporate pieces of the old building into the new, 775-seat school that will replace it and house the H-B Woodlawn secondary program. The vote was the final hurdle before APS can move forward designing the $80.2 million project, including demolition of the Wilson School.

“We appreciate that there is community passion around preserving sites that help tell Arlington’s story,” Board Chair Mary Hynes said in a press release. “That is why we have directed the Manager to collaborate with APS to honor the history of Wilson School in a meaningful way even as we move forward to build a new school designed to address the challenge posed by our rapidly growing student population.”

The Arlington School Board and Planning Commission each recommended denying the historic district status, while the county’s Historical Affairs and Landmark Review Board voted unanimously in favor of the status. If the County Board had sided with the HALRB, the new school’s construction would have had to go through more regulatory processes. APS Assistant Superintendent John Chadwick said the costs would likely exceed the $80.2 million budget, but he added no formal study of the costs had been done.

“We do feel keeping [the school would cost] a great deal more than has been quoted in the community,” Chadwick told the Board on Saturday. “The interior of the building does not comply with current codes. Therefore we would have to replace staircases. It does not have any level directly accessible from grade, which is clearly an issue with persons with disabilities.”

The building has been significantly renovated from its initial form, but the HALRB ruled it still meets at least six of the 11 criteria for historic district status; a building needs to meet just two to qualify for approval. 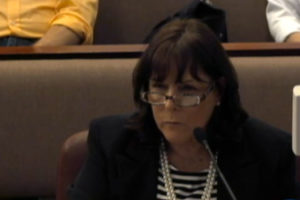 HALRB chairman Joan Lawrence noted the Wilson School has an architectural style “that is an important visual reminder of the time period” when it was built, and “provides a sense of place and connection with our past in the most urban area of Arlington, other than Crystal City, where there are no remaining connections to the past.”

More than a dozen speakers spoke before the Board, most in favor of preservation. Many of those speakers were among the 161 who signed a petition to preserve the building. In giving her presentation, Lawrence acknowledged it was likely falling on deaf ears.

“Preserving significant reminders of the county’s history was important to the County Board at one time,” Lawrence said. “I wish I could say with confidence that it has the same importance today. Too many times, I feel like the Lorax speaking not for the trees but for historic buildings.”