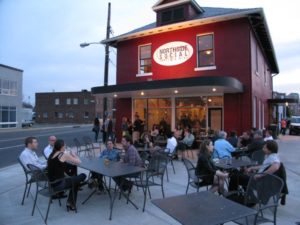 (Updated at 2:20 p.m.) Three years after the Fedorchak brothers, Stephen and Mark, opened The Liberty Tavern in Clarendon, they were working to open two new businesses within, they hoped, “six months to a year of one another.”

But, as is common in the restaurant industry, the opening dates changed, and the timetables of the coffee shop and brasserie the Fedorchaks were trying to open kept lining up more and more.

“I remember when it happened, it was like a freight train coming down the tracks,” Stephen Fedorchak told ARLnow.com last week. “We thought ‘these things are going to open within days of each other.’ We’re proud that we pulled it off, but we wouldn’t necessarily try to do it like that again.”

Five years ago this month, Northside Social, the coffee house and wine bar, and Lyon Hall, the brasserie, opened seven days apart. Combined with Liberty, they give the Fedorchaks and their partner, Brian Normile, a trifecta of staples in the Clarendon restaurant scene.

“They really are anchors in the Clarendon community,” Matt Hussmann, the executive director of Clarendon Alliance, said. “The three restaurants they have, each are distinctive, they fit in really well with the community.”

That’s not a surprise, since the owners of three of Clarendon’s most celebrated restaurants all live in the neighborhood. They’ve seen it grow, seen it change, and they have had hands in both.

Before Northside Social Coffee and Wine opened, the distinctive red building at the intersection of Washington, Wilson and Clarendon Boulevards was home to Murky Coffee, where Fedorchak said his team “must have met 100 times” when discussing their burgeoning business. When Murky was closing and the space opened up, they felt they had to jump on it.

“It has a legacy of not only a coffee shop but a community gathering place, and the building itself has been a community gathering place for 100 years,” he said. “We wanted to offer a place where you could visit every day if you wanted to. We liked the idea of something versatile, open a lot of hours, and the idea of an old-fashioned coffee house vibe with a cultural center feel to it.”

To ensure business from sunrise to sunset, they installed a wine bar on the second floor, and the idea clicked. “The business has been busy since day one,” Fedorchak said. They also expanded the outdoor patio, which rarely has an empty seat on sunny days, and the food menu, a tricky feat considering the building’s historic status precludes the owners from installing some industrial kitchen equipment.

The building is part of the secret sauce that makes Northside unique. Fedorchak said people ask him all the time if a second Northside Social is in the works somewhere.

“I tell them, ‘when we can find a space we like as much as this one,'” he said. “Between the two floors and the outside capacity, it’s awesome. The visibility is unparalleled, there’s great sunshine, the upstairs during the day is quieter; it allows us to have a variety of ambiences.” 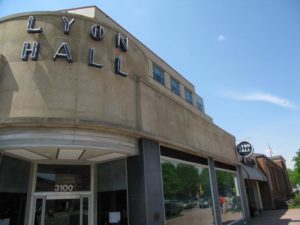 While the Northside Social opportunity opened up, Lyon Hall (3100 Washington Blvd) was the product of the ownership team seeking out a new venture.

“We thought it would provide some diversity to what’s out there,” Fedorchak said. The French-style brasserie — with some German influences — serves dishes like a Bohemian sausage platter. It provided variety to a Clarendon restaurant scene which at the time was experiencing an influx of frozen yogurt and pizza restaurants.

“Lyon Hall has been a lot of fun for us because the business continues to improve every year,” Fedorchak said. “It’s kind of worked for us, because it is perceived as distinctive. People wouldn’t normally go to a German restaurant, but we tried to offer a fun bar, we have happy hour there seven days a week, we really love the patio. It worked out great.”

While the Fedorchaks and Normile love their own restaurants, they also make a point to visit their neighbors and competitors.

“I love going to O’Sullivan’s, the guys at Green Pig Bistro do a great job, we hang out at Ray’s the Steaks all the time,” Fedorchak said. “I hear people talk about the fact that Clarendon’s changing fast, some people think it’s changing for the better or worse. I lived in North Arlington for the first time in 1992, going to places like Whitey’s and Strange Ways. And I’ve got places I love to go to now. I think it’s always been a neighborhood that’s evolved relatively steadily over the years.”

The three businesses have also evolved steadily, adding Executive Chef Matt Hill last year to oversee all three restaurants. Fedorchak also sang the praises of Sean Lowder, who has been the general manager at The Liberty Tavern since it opened, and Alison Christ, the GM who opened Northside Social, now opening up a wine bar in Hong Kong.

But, above all, Fedorchak said his primary goal has been growing the community around the restaurants. They hold fundraisers for the Clarendon Alliance, Virginia Hospital Center and Doorways for Women and Families. They participate in Clarendon Day every year, and the heart of each restaurant is a bar that the owners want people to feel comfortable congregating in.

“We’re big believer that restaurants not only physically nourish but emotionally nourish, where people can put their cares aside, put the cell phones away and relax for a while,” Fedorchak said. “We’ve been fortunate to feel largely supported by the community since day one.”

That mindset has kept the business successful — “we’d feel different if we were struggling to get to five years,” Fedorchak said — and kept them in Clarendon.

“We are hoping to grow those businesses for a long time,” Fedorchak said. “Liberty Tavern is turning 10 in a couple of years, and that’s a big milestone. We’re going to be looking forward to the next 10 years.”