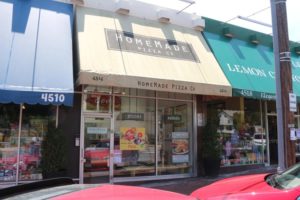 HomeMade, which offered bake-at-home pizzas, closed in 2014 after about five years in business at 4514 Lee Highway. It was part of a company-wide shutdown for the Chicago-based chain.

Now, another regional pizza chain that has gone through financial troubles is coming in.

Upper Crust shuttered 10 locations, including one at 1747 Pennsylvania Avenue NW in D.C., during a bankruptcy in 2012. It’s apparently now on the rebound, under new ownership and management.

Upper Crust Pizzeria has applied for a permit to sell wine and beer at its new Lee Heights Shops storefront. There are no records of any construction permits being applied for so far.

Upper Crust currently has six locations, all in the Boston area. Ben Deb, the company’s CFO, says the Lee Highway location will be the first of what they hope will be several D.C. area locations.

“We’re looking at multiple spots in the D.C. metro area,” Deb told ARLnow.com. “The brand had a great following when it was there. We get inquiries on our website all the time.”

Construction is expected to begin next week and the company is targeting an opening in Arlington as soon as mid-July, according to Deb. He said Upper Crust’s freshness and thin crust pizza style sets it apart from other pizza joints.

“The product is second to none… we make our dough fresh on site everyday and use fresh ingredients,” he said. “We’re really looking forward to being a part of the Arlington community.”

END_OF_DOCUMENT_TOKEN_TO_BE_REPLACED

More Stories
Stock Up on Hurricane Preparedness Supplies Tax-Free This WeekArlington Pet of the Week: Xander