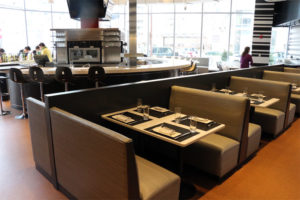 The eatery, at 800 N. Glebe Road in Ballston, moved here from New York City and opened in December. It received a mostly negative review from the Washington Post’s Tom Sietsema in January.

The 4,500 square foot restaurant sat 130 and offered grilled pizza and value-priced wine. Though promising value, speedy service and specialty pizzas cooked in a custom designed, 900-degree grill, the concept failed to catch on in what is a relatively low foot traffic portion of Ballston.

“It closed because, while it had a good core group of fans, it didn’t have enough business to keep it going,” PR rep Jill Collins said.