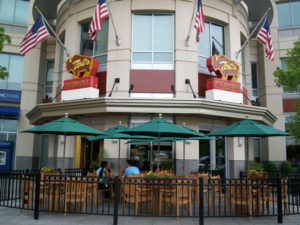 Saturday will be the last day for Ted’s Montana Grill in Ballston.

The bison-centric restaurant chain decided not to renew its lease at the Ballston Point building at 4300 Wilson Blvd, according to Ted’s President and COO Kristi Martin. It will close this coming Saturday, June 13, and the staff will be transferred to a soon-to-open location in Gaithersburg, Md., Martin said.

The new Ted’s is expected to open in Gaithersburg’s Downtown Crown development in August, said Martin.

“Team members at the Ballston Point location are aware of this closing, and all team members have been offered positions at the Gaithersburg or other Northern Virginia locations,” she said. “We look forward to expanding our Big Sky Spirit to the Gaithersburg community — an area that we see as a strategic fit for the growth and future of our company.”

Ted’s currently has two locations in Arlington — the Ballston location and another at 2200 Crystal Drive in Crystal City. No changes are planned for the Crystal City location, according to a PR rep for the restaurant.