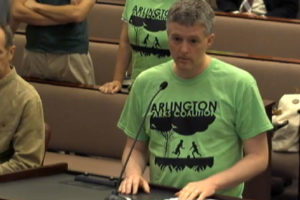 Arlington residents, including two County Board candidates, pleaded with the County Board to save Rosslyn Highlands Park on Tuesday.

The county is considering trading part of the tiny park to a developer in exchange for a new fire station as part of its Western Rosslyn Area Plan Study (WRAPS). Board members unanimously approved the advertisement of public hearings on the plan during the meeting.

“Once this land is gone, it’s gone. The land will always be worth more than the fire station. So let’s hold onto the land and do what is right for the community,” said Michael McMenamin, an independent candidate for County Board. Independent candidate Audrey Clement also spoke out against the plan.

McMenamin was joined by more than a half dozen people who live near the park, including Washington Lee High School junior Johanna Klein and 12-year-old Jim Sharkey. Even more people signed up to speak during the public comment on the plan but left as the clock ticked close to 10:00 p.m. before the item was heard.

Sharkey, who was inspired to research park space in Arlington after learning of the park’s possible sale, said Arlington fares poorly in terms of park land when compared to neighboring Fairfax County. 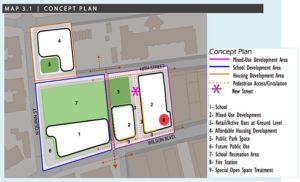 “If we dramatically shrink Rosslyn Highlands Park, we take away even more park space from Arlington where parks are small and sparse enough already,” he said.

The park holds many memories for Sharkey and Klein, who both say they grew using it. Sharkey’s family is considering moving and he said he believes that the end of the park will only encourage his family to move.

“Rosslyn Highlands Park is not just a part of a number on a graph,” he said. “I believe that parks are important because they’re a good place for people to have fun and bond together.”

Most of the discussion, however, revolved around the park and what many said was an opaque process of deciding to trade part of it to a developer. Caroline Haynes, a member of the Parks and Recreation Commission, called the process frustrating. 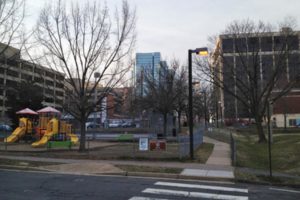 “I guess from our perspective, given that residents do feel like they sacrificed something in this and the density is going to be greatly increased in this area, we believe that is going to be absolutely critical to make sure this park is outstanding,” she said. “That what we have there is going to be an oasis in the midst of very high density. And that we really need to dedicate the resources to make this an incredible destination park both for residents and for our community.”

Members of the working group also voiced similar concerns saying that the group and community did not have enough say in the drafted plan.

“From the beginning, the working group expressed a clear goal that open space be a prime directive of the process and not simply residual of what’s left over,” Erik Gutshall, an at-large member of the working group said.

Members of the public will have another chance to weigh in on the Western Rosslyn Area Plan in July. A public hearing will be held before the Planning Commission on July 6 and before the County Board meeting later in July.

“The proposed plan seeks to balance the need for open space in Western Rosslyn with the need for a new school with associated gym and playing field accessible to residents, a new fire station and more affordable housing in collaboration with commercial redevelopment,” County Board Chair Mary Hynes said in a statement.