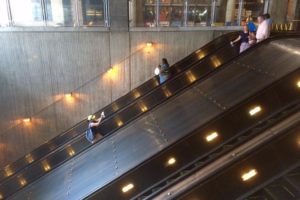 A worker was rescued from one of the Rosslyn Metro station’s escalators early this morning.

The 23-year-old man, an employee of escalator contractor KONE, got his leg trapped between the framework of the escalator and a steel plate just before 2:00 a.m., according to Arlington County Fire Department spokeswoman Lt. Sarah Marchegiani.

She was unable to say whether the escalator was moving at the time of the incident.

Firefighters freed the man and rushed him to George Washington University Hospital with a “serious right leg injury,” Marchegiani said. The injury was not considered to be life threatening.

No additional details were immediately available.