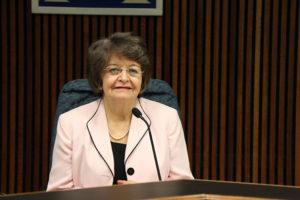 The Arlington School Board voted unanimously this morning to include gender identity and expression to its nondiscrimination policies for hiring teachers and other employees.

The language is intended to prevent discrimination and harassment against transgender individuals.

The School Board also voted to ensure that all of its employment policies include protection against discrimination based on disabilities, marital status, sexual orientation, economic status and national origin.

“I’m very proud that we have these policies, and we are going to implement it,” said Emma Violand-Sánchez, who was elected as the School’s Board 2015-2016 chair during the meeting. “And that we are going to implement it with students, with the staff, within the hiring process, and I think we have to eliminate bullying, harassment and more than anything enhance the candidates in our school system for employment.”

Complying with the federal government was one reason the board members adopted the new changes. But members also said it was the right thing to do.

“We do not want to put our community, legally, down the road,” outgoing chair James Lander said. “And so, again, in alliance with our County Board colleagues, the state and the federal government, we again are showing progressive leadership.”

The School Board did receive emails about the changes, Lander said. However, many questioned the procedure and not the policy. Residents were worried that the board would make the decision behind closed doors.

There were no public speakers at the meeting, which was a surprise, member Abby Raphael said. However, throughout the process, there had been little dissent from the community or APS employees, Barbara Kanninen noted.

“It was very clear from the beginning we were going to do this,” she said. “I don’t think it was ever an issue of any disagreement in terms of wanting to do this.”

Update at 12:40 p.m. — Democratic County Board candidate Christian Dorsey has issued a statement commending the School Board’s action and calling on Arlington County to make similar policy changes. “I urge the County Board to pursue ways to update the County Code to ensure that people are not discriminated against in Arlington based on their gender identity,” he said.