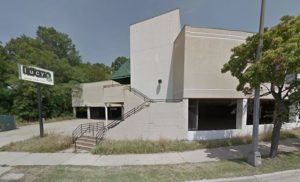 (Updated at 2:15 p.m.) A new billiards hall and neighborhood bar is coming to the former Lucy’s ARL location near Shirlington.

Chester’s Billiards Bar & Grill will be located at 2620 S. Shirlington Road, which has been without a restaurant tenant since Lucy’s closed in December 2013.

Co-owner Derrick Fulghum, Sr. told ARLnow.com today that he’s hoping to open by mid-August, should all go well with his permits and licenses.

Chester’s will largely pick up where Lucy’s left off. No interior construction of note is planned — the pool tables and bar will be in about the same place. Two things that are changing: more of a focus on live entertainment and on families.

Fulghum said he will be applying for a live entertainment permit, to allow him to offer performances by standup comics, bands and DJs.

As for his customer base, Fulghum said he hopes to attract families and local residents around the Shirlington area. That’s a bit of a contrast from Lucy’s, which proudly displayed the motto “Shrews. Brews. Cues.”

“I have a family and I’m planning on bring them here,” he said. “It will be very inviting, a fun atmosphere. We look forward to giving back… and becoming part of the Shirlington community.”

Chester’s will serve American cuisine — “good food,” Fulghum promises. He said local residents he’s talked to have been positive about the concept. Plus, he’ll benefit from reduced competition: The Bungalow Sports Grill in Shirlington, which had billiards tables, closed last month.

This will be Fulghum’s second South Arlington and third D.C. area establishment. He and his business partner own Andalusia Tea Room, a hookah bar in Crystal City, as well as a bar and grill in Rockville, he said.