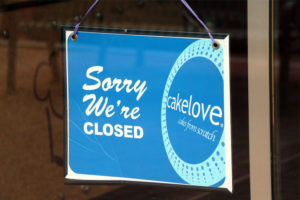 (Updated at 3:35 p.m.) Next month, the Bungalow Sports Grill plans to close its Shirlington location. Yesterday, the doors of Bonsai Grill were locked and the lights were off in the restaurant, indicating the Japanese restaurant has likely closed.

If Bonsai doesn’t reopen and Bungalow indeed closes on June 10  — when manager Carla Marquina tells ARLnow.com it will — the two businesses will be added to the growing list of Shirlington establishments that have fallen by the wayside, and more could be on the way.

Since last October, counting Bonsai and the Bungalow, seven businesses in the Village at Shirlington have closed: Bloomers, Periwinkle, Aladdin’s Eatery, Cakelove and The Curious Grape are all gone. Other than the Curious Grape, whose space was quickly taken over by an Italian restaurant, all of the spaces remain vacant.

With the vacancies have come less foot traffic and rising frustrations, business owners say. Some are blaming Village of Shirlington owner Federal Realty Investment Trust for their woes, saying the company keeps raising rents even as tenants struggle in a local economy that seems to be slowing.

“We are struggling to survive,” one Shirlington restaurant owner told ARLnow.com, speaking on the condition of anonymity for fear of landlord repercussions. “The landlord should reduce the rent or at least keep it the same. They don’t care about the business.”

Marquina, the Bungalow manager, said landlord problems are the reason that the neighborhood sports bar, which has occupied its large space off S. Randolph Street for decades, is shutting down.

“The owners have had disputes with the landlord,” she said. “They haven’t been fixing things that they should fix, and it’s not worth it to us to fix it.”

Bungalow owner Win Froelich spoke to ARLnow.com this afternoon and said Marquina “was not involved with what was going on,” and added “Federal has been lovely to work with.”

“We had an extended negotiation over renewing the lease, and the economics of renewing for us just didn’t work,” Froelich said. “There’s nothing that the landlord is obligated to repair that the landlord hasn’t repaired. The total package that worked for us and the total package that worked for them didn’t match up in price… They’ve been a great landlord and we’re sorry that we’re going to be leaving the Shirlington Village.”

While some vacancies have filled — the Extra Virgin space that has sat empty for two years will soon be home to an art-themed restaurant called Palette 22 — many others remain, and even store owners who say they have “a great relationship” with FRIT say they wish the Bethesda-based real estate firm would step up its effort.

“Walking down this really small area and seeing a bunch of empty spaces is depressing,” another store owner, who claims to be “doing fine” with no complaints about his relationship with FRIT, said. “[FRIT] could be doing a lot more to bring in new business.” 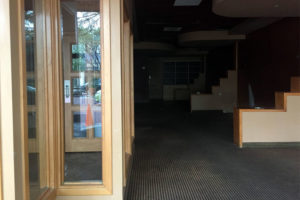 When Periwinkle closed, its owner told ARLnow the rent was too high, a refrain repeated by at least five business owners we contacted. According to multiple business owners, FRIT raises rent every year — a not uncommon practice for commercial and residential real estate — despite what they see as declining foot traffic.

Shirlington isn’t the only place FRIT is losing tenants either; in Pentagon Row, Denim Bar closed in April and another retailer is expected to announce its closure soon. When asked for comment, FRIT spokeswoman Jill Powell said she “was unable to reach the appropriate people at corporate.”

Along with Palette 22, FRIT is renovating Shirlington’s AMC movie theater and Powell said they are expecting to make “another exciting new lease announcement” soon. Regardless of Shirlington’s future businesses, some of its current tenants remain deeply dissatisfied. 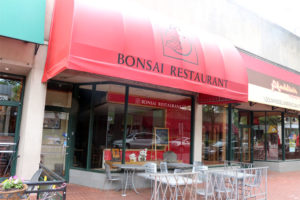 “Business has been slower,” the second store owner said, “and I’ve heard from a lot of people that property management is the issue.”

The first owner said she’s not sure how much longer she’ll be able to stay open. She said she doesn’t take home a salary and works 14 hours a day, seven days a week.

“We signed a contract and agreed to the rent. We can’t blame [FRIT],” she said. “But people aren’t going out to eat anymore. If the landlord understood about the economy, they’d stop raising the rent every year.”