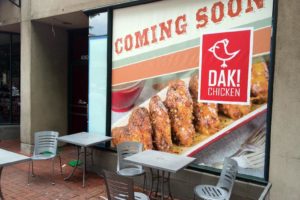 A large window sign is up for a new Korean-style chicken restaurant that’s coming to Shirlington.

The Village at Shirlington announced late last month that DAK Chicken would be opening in the former Bonsai space on Campbell Avenue.

The concept is similar to Bonchon, a Korean-style chicken restaurant that opened on N. Pershing Drive in Lyon Park in 2013.

DAK, which will serve lunch and dinner, is expected to open “later this summer.” It joins two other restaurants that are planning to open relatively soon in Shirlington: Hula Girl and Palette 22.