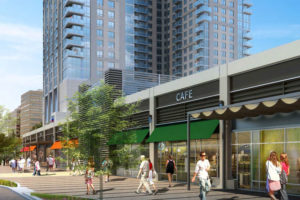 (Updated at 5:20 p.m.) Arlington has a new action plan for improving the prospects of retail businesses in the county.

The County Board voted 4-1 on Saturday to approve the plan, which has been years in the making and will replace an outdated retail plan originally passed in 2001. The new plan moves Arlington from a “retail everywhere” approach — policies designed to put ground floor retail in most commercial buildings, regardless of whether a business could actually survive in a given location — to what’s billed as a flexible but “curated” approach.

Color-coded maps will now define where the county would like certain types of retail businesses to set up shop. The owners of buildings in high foot traffic areas will be encouraged to adopt certain building standards that are conducive to ground floor retailers, from higher ceilings to smaller building lobbies. 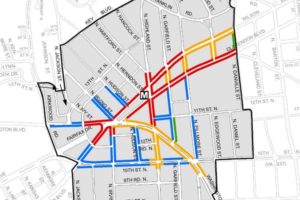 “By partnering with our business community and our residents, we’ve developed a plan that takes important steps to improve and strengthen the retail sector in Arlington,” Arlington County Board Chair Mary Hynes said in a statement. “We believe the consistent, clear guidance and definitions, as well as flexibility of use, design and timing in the plan will better serve those who live and work here when they shop, dine, get their hair cut and bank on streets throughout the County.”

The plan passed with two notable amendments, both proposed by County Board member John Vihstadt and both addressing concerns of the local business community.

The first further codified that the plan is intended as a guiding principle — to be applied primarily during development approval processes — rather than explicit county rules and regulations. The second added service and repair businesses to the types of businesses encouraged in “red zones” — the parts of Arlington’s business districts with the highest foot traffic. In the draft plan, staff had recommended limiting those zones to shopping, dining and entertainment.

“This plan has come a long, long way,” Vihstadt said after the motions passed by 4-1 and 3-2 respectively. “It was not a good plan when it started out.”

The plan passed with tepid support from the Arlington Chamber of Commerce, which had expressed concern about earlier versions of the plan it deemed “too proscriptive.” 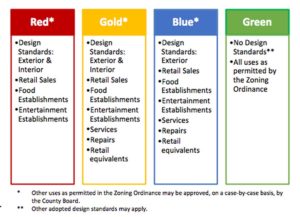 “Explicit addition of a statement that the retail plan is not regulatory is paramount,” Chamber President and CEO Kate Roche told the Board. “Moving forward into implementation, we emphasize the importance of the plan being understood as a guideline… we want to make sure this plan isn’t codifying anything that will prevent Arlington from becoming the great, flexible place that we all want it to be.”

The changes still weren’t enough for Libby Garvey, who was the lone vote against the plan.

“I’m much more conformable with the plan with the changes, but still not comfortable enough to support it,” she said. “Both the people who have to make it work and the people we serve are saying, ‘it’s too proscriptive.'”

Speaking before the Board began discussing the plan, Stefanie Pryor, president of the Arlington County Civic Federation, urged a “no” vote. She argued that the public process around the plan was poorly publicized and that Civic Federation members’ concerns had still not been met.

“We will lose economic growth and businesses to other, less onerous [jurisdictions],” she said. “Please do not adopt.”

While he ultimately supported the plan, Vihstadt complained that it didn’t address the issue of parking. County transportation policy, he said, should encourage attractive parking options near retail businesses.

“Do we need to look at our parking policy with an eye as it relates to our retail policy,” Vihstadt said. “Sometimes you hear from our small businesses… that our ‘Car-Free Diet’ is starving retail and especially small retail.”

“It’s very hard for someone who’s in a car and might want to stop at a bakery or a shoe repair store… they don’t want to go into a parking garage or they’re afraid about cost,” Vihstadt continued. “They can’t find metered parking so they give up and drive to Seven Corners or drive to Westover. Are we being sensitive enough to people who drive in relation to our retail goals?”

Fisette, meanwhile, chided Vihstadt for a “very inaccurate description” of the Car-Free Diet program and said of providing transit options: “one can only argue that it enhances retail activity.”

Fisette also noted that Arlington is currently studying whether to extend metered parking hours later in the day, in certain parts of the county, to encourage more street parking turnover around retail districts.

More about the new Retail Action Plan, from the county’s press release on its approval:

The plan includes both a vision and three implementation elements: retail maps, design guidelines and an action plan. Together, they provide guidance to developers; property owners; business owners; staff; the community, and the County Board and its commissions when considering ground floor uses in both new development plans and proposed amendments to existing plans.

The vision statement for the plan says that “Arlington will be a community where retail is convenient, appealing, activating and sustainable; that provides interest and authenticity, entertainment and experiences, and goods and services to residents, employees and visitors; and where local, independent, regional and national businesses thrive.”

The plan, which replaces the 2001 Retail Action Plan, expands the definition of retail in Arlington to include shopping, dining, entertainment, services and repair. It also incorporates a new term, “retail equivalents.” These are uses that, while not traditional retail uses, provide similar visual interest and active street life within a storefront to traditional retail uses. Some such uses include child care centers, schools and other educational facilities, medical uses, civic and government uses and in some instances, residential amenities.

In this time of challenging market conditions, the retail equivalent concept increases the level of flexibility, accommodates the changing nature of retail and improves Arlington’s level of competitiveness in attracting future office tenants with a desire to create an enhanced ground floor work environment.

The Retail Plan is a guide that will affect future County legislative and administrative actions and will inform future neighborhood, sector and small area plans, by establishing a common vocabulary for ground floor uses.

Mariah Joyce contributed to this report