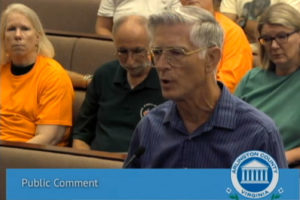 (Updated at 4:20 p.m.) A new proposal for the Reevesland farmhouse may be the compromise needed between the County Board and farmhouse supporters who don’t want the farmhouse to be sold to a private party.

Karl VanNewkirk, the president of the Arlington Historical Society, spoke at the Arlington County Board meeting on Saturday, informing the Board members that he has been working with the Boulevard Manor Civic Association to create a new plan for the farmhouse.

While VanNewkirk did not provide a detailed plan during his speaking time, he did say that the county’s estimate of $2-2.5 million in renovations costs was being driven by the need for a large parking lot and American Disabilities Act compliance. Under a private ownership, the farmhouse would not need the lot nor to be fully compliant with ADA.

“I would like to ask two things from you,” he said to the Board. “A: would you give us a little more time to develop a detailed plan that would meet with your approval and B: would you continue to allow staff, the county staff, to work with us?”

VanNewkirk told ARLnow.com that the Boulevard Manor Civic Association and Preservation Arlington are looking at options for the farmhouse. Arlington Historical Society will discuss whether it wants to join in the effort at a meeting of board directors on tonight, he said. 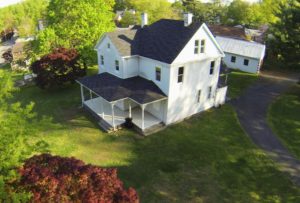 The bare bones of the plan is for a non-profit partner of the Boulevard Manor Civic Association, and other supporting groups, to buy the farmhouse from the county, said Sandra Spear, who is leading the working group on the farmhouse for the civic association.

The civic association is helping to raise funds through charitable donations to help with the costs of renovations, Spear said.

“Our plan is nascent at this time, but the barest bones are that we propose to purchase the house from the County for a nominal sum, lease the land on which it sits, raise money to restore it, and use it in some fashion as a museum to Arlington’s agricultural past. Each element of this plan differs from Reevesland Learning Center’s (RLC) proposal,” Spear said.

It would not be a full learning center, as the Reevesland Learning Center proposed, because of ADA and parking lot runoff concerns. However, the groups may incorporate some of those elements into its proposal, VanNewkirk said.

“Have we fleshed it [a proposal] out, not yet, but we are working on it,” VanNewkirk said.

Board member Libby Garvey told the other Board members that she had also met with the Boulevard Manor Civic Association and that she found its plan for Reevesland to be more responsible than the one proposed by the Reevesland Learning Center.

“What the Boulevard Manor folk are looking at is a different approach and much more responsible, and I’m pleased to see them doing that,” Garvey said.

VanNewkirk and the Boulevard Manor Civic Association have reached out to the Reevesland Learning Center but they have not responded yet, VanNewkirk told ARLnow.com.

Board member John Vihstadt was also in support of VanNewkirk and Boulevard Manor Civic Association’s work toward a plan for the farmhouse.

“This is really the first time that we have heard that there has been any effort by the supporters of Reevesland and the larger community to actually raise funds and I look forward to some sort of public-private partnership as opposed to just county tax dollars for this facility,” he said during the board meeting.

Despite the newfound potential steps forward for the farmhouse, members of the Reevesland Learning Center group are still upset over the Board’s May vote.

Joan Horwitt of the Reevesland Learning Center on Saturday asked Board members to reverse their vote on the sale of the farmhouse. Her public comment turned heated as Chair Mary Hynes and Horwitt argued, with both speaking over the other.

Hynes stopped Horwitt’s speech saying that the Board had already heard one speaker for the topic of Reevesland farmhouse. County Board rules say that there can only be one speaker per topic during the general public comment period.

Horwitt argued that she was speaking about the public process behind the vote, not the actual farmhouse.

“It didn’t sound like that in your beginning paragraph,” Hynes said to Horwitt. “Want to get to the part where you talk to us about public process?”

Hynes started the meeting’s public comment section by reminding all speakers of the Board’s rules for public comment, including that the Board would not hear comments about items that have already been decided on, items on the day’s agenda or items that were advertised for a public hearing.

The rules are not new and are adopted every January, Hynes said. Public comment is supposed to be used to allow people to bring new items to the Board’s attention, she told ARLnow.com.

“So I was basically trying to say that public comment is not to rehash a topic or give early testimony on a topic,” she said.

Hynes said she noticed that more people are attempting to talk about topics that are already decided, something that also happened during the prolonged debate about Columbia Pike streetcar project. When this happens, the Board and residents end up talking about the same thing every month, she said.

While some residents were upset after being prevented from speaking at the Saturday meeting, Hynes said public comment is not the only way people can interact with the Board.