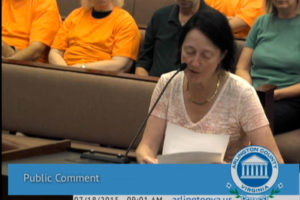 (Updated at 2:15 p.m.) Independent candidate for County Board Audrey Clement is continuing to criticize Arlington for hosting a bike race last month.

On Saturday, Clement, a self-described avid cyclist, said the Air Force Association’s Cycling Classic, a two-day racing event in Clarendon and Crystal City, was dangerous to the public.

“No mention made by the Air Force Association of the danger to participants and pedestrians of conducting high speed races in the heart of a densely populated business district or the nuisance value of blocking major throughways to vehicular traffic for half of the day,” Clement said.

Clement previously spoke against the race at a last month’s Board meeting, while the race was happening, because the road closures prevented her from biking to the meeting on the route she usually takes. During that meeting, she told Board members that closing roads for the race was “reckless endangerment.”

“I risked my life to bike to this meeting,” she asserted.

Clement noted on Saturday that she was “ridiculed” for her remarks in June.

“At the June 13 County Board meeting I was ridiculed by County Board members for characterizing the bicycle races in progress that day in Clarendon as ‘reckless endangerment,'” she said.

“Other Board members agreed with Mr. Fisette that the barricades put in place were sufficient to prevent accident or injury, I wish that were true. Yet on Thursday, July 2, one cyclist was killed and two were critically injured when one of the cyclist’s had a tire blowout on a downhill race sponsored by the World Police and Fire Games in Prince William Forest Park,” Clement said during the July 18 Board meeting.

Clement went on to say that the sport of cycling has more deaths than the Indianapolis 500, which had its last death in 1973. While there were some crashes at this year’s Clarendon and Crystal Cup races, no deaths were reported. During the race, barriers kept spectators away from the speeding cyclists and event staff were positioned at every crossing area to help people get from one side of the course to the other.

“Our special events [are] one of the things that makes Arlington special. We have a special events policy, we have our block parties, we have bike events, we have neighborhood events, and events sponsored by the BIDs that happen in our denser corridors and each of those require work and require staff time to make sure the road network still works and they’re safe,” Fisette said.

In her remarks, Clement also called for a multi-modal system of enforcing traffic laws, with police officers monitoring activity from bikes. Board Chair Mary Hynes said a system called “PAL” is already in place to encourage cyclists and motorists to be careful on the road.

More Stories
Arlington Pet of the Week: TeddyWellness Matters: The Pool That Isn’t Just for Splashing Around