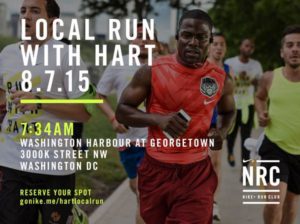 Comedian Kevin Hart ran an impromptu 5K through part of Arlington this morning.

The funnyman is in town as part of his “What Now” standup tour, which is at Verizon Center for a second performance tonight.

Hart organized the 5K with sponsor Nike and quickly gathered about 1,500 participants, who began running just past 7:30 a.m.

The route took runners from Georgetown, over the Key Bridge, through a small slice of Rosslyn, before getting on the Mt. Vernon Trail and taking the Roosevelt Bridge back to D.C.

Arlington County Police were reportedly only made aware of the 5K while it was going on.

Pushing you to better your best. Thanks for the words of #inspiration @KevinHart4real! #RunWithHart #NikeRunning pic.twitter.com/zA9NoEnnDR