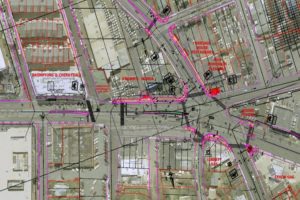 Arlington County is finalizing the design for changes to the historically busy and confusing “Five Points Intersection” in Cherrydale.

The intersection, located near the Cherrydale Volunteer Fire Department at the confluence of Lee Highway, Old Dominion Drive, N. Quincy Street, Military Road and N. Quebec Street, has long been a source of ire for pedestrians and drivers alike because it can create dangerously complicated traffic patterns.

This frustration increased in 2013 when the county chose to move forward with proposed changes to the intersection as part of the Cherrydale Lee Highway Revitalization Program, over the objections of neighborhood residents. While the changes were intended to improve the intersection for pedestrians in keeping with the program’s goal of a more walkable Cherrydale, residents claimed they made the intersection even worse.

According to a 2014 neighborhood update on the project, some alterations that irked residents, such as guides directing cars to turn left in front of oncoming traffic (known as “puppy paw guides”), have since been removed. 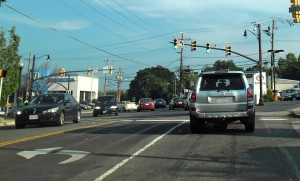 However, the update claimed the changes were not extensive enough and the way residents turned before, while not a typical traffic pattern, was actually safer and more efficient.

As of now, the county is still moving forward with many of their proposed modifications. According to project manager Elizabeth Diggs, the project design is 90 percent complete and changes will include the installation of wider sidewalks, the addition of bike lanes, reflective crosswalks and handicap ramps, and upgrades to traffic signals, timing and street lights.

“The intersection improvements are being designed to improve vehicle turning movements and create a safer environment for pedestrian, bicycle and transit users,” said Diggs.

Construction on the project, originally planned for this spring and summer, is now slated to begin this winter.