The LaPorte property at 3600 S. Four Mile Run will be the temporary home of ART buses until a new facility is finished in the Crystal City area.

The temporary housing of buses is one of the topics on the agenda for a Sept. 1 community meeting, said county spokeswoman Catherine Matthews. The meeting will also discuss street parking, the upcoming Shirlington Crescent-Four Mile Run planning study and Jennie Dean Park.

“The meeting on September 1 (with residents from Nauck, Shirlington and Fairlington) will really just be to communicate about and implement some community planning efforts and address some outstanding neighborhood concerns,” Matthews said in an email.

County officials will attend the meeting to answer questions about any of the agenda items, Matthews said.

Buses will be housed at LaPorte property until 2017, when the new facility at the corner of S. Eads and 32nd Streets  is expected to be finished, she said.

“In terms of parking buses here, the County does not foresee any major changes or delays to existing traffic patterns. All of our ART buses are CNG (compressed natural gas) powered and run on natural gas, making these buses cleaner and quieter in operation,” Matthews said.

Construction to build the new ART facility begins Sept. 9 and is expected to last 18 months, according to the project’s website. The new two-story facility will have spaces for bus maintenance, bus washing, a gas station and parking.

The meeting will also discuss planning efforts for the Jennie Dean Park and Shirlington Crescent-Four Mile Run area. Both projects are in preplanning phases, Matthews said. 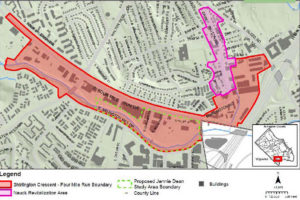 The Shirlington Crescent-Four Mile Run Planning Study is planned for 2015, according to the project’s website, and will look at the land use in the area.

“The goal will be to develop a vision and long-term planning guidance for the area, which includes primary industrially zoned properties,” Matthews said in an email. “We will be examining potential land use changes, transportation improvements; and environmental issues, given the proximity of the Four Mile stream.”

At the same time, the county will also be creating a master plan for Jennie Dean Park, but the project is still in the early stages, she said.