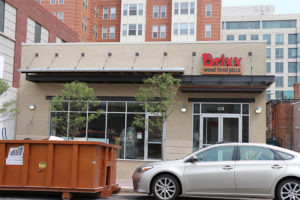 Brixx Wood Fired Pizza, located at 1119 N. Hudson Street next to Nam Viet restaurant, hopes to start serving pizza and beer mid-October, barring any construction delays, according to Tim Miner, the director of marketing for the company.

The North Carolina-based chain hopes to start training staff in the second week of October, Miner said, with the new restaurant opening a week later.

In addition to regular and gluten-free pizza, Brixx serves sandwiches, pasta, beer, wine and cocktails, according to its website.

Brixx does not plan to have any grand opening specials, but will start “business as usual” on the opening day, he said. The restaurant will have wine specials on Sundays and Thursdays and craft beer specials on Monday, Tuesday and Wednesday. Miner could not elaborate on the deals because of Virginia law, he said.

The pizza joint also features buy one, get one pizza and appetizers after 11 p.m.

The Clarendon location will be Brixx’s third Virginia restaurant — there is another location in Charlottesville and Woodbridge. The chain came to Clarendon because of its exciting neighborhood, Miner said.

“It’s a thriving community, and we feel the folks that live in the area are a perfect fit,” he said.

END_OF_DOCUMENT_TOKEN_TO_BE_REPLACED

More Stories
Rental Report: Where To Park or Not to Park, that is the QuestionWoman Falls on Track at Ballston Metro Station