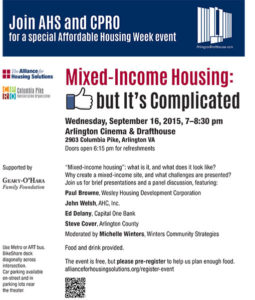 The Alliance for Housing Solutions and Columbia Pike Revitalization Organization will hold a panel discussion tonight about the positive aspects and challenges of mixed-income housing in Arlington.

The event will run from 7-8:30 p.m. at the Arlington Cinema and Drafthouse (2903 Columbia Pike). The discussion comes in the middle of “Affordable Housing Month” and days before the County Board will discuss the Affordable Housing Master Plan.

Panelists, including a banker, an Arlington County official and developers who have worked with mixed income housing sites, will talk about what mixed housing is and where it does and does not work, said AHS Executive Director Mary Rouleau.

“We’re sponsoring this to get some people on stage who have dealt with mixed-income housing developments,” Rouleau said.

The event is intended to be an informational discussion, she said, adding that panelists will be talking about the positives and complications with mixed income housing.

“From our [CPRO] side I would just say: that the focus of this event is to provide first hand information (and education) on what mixed-income housing development actually is and what are the economic pre-requisites for successfully developing mixed-income housing projects,” CPRO Executive Director Takis Karantonis said in an email.

“The invited panelists are among the most knowledgeable professionals on this topic and will offer the audience a great opportunity to learn and discuss,” Karantonis said.

“It’s complicated and we are just trying to explain to the community that we can’t just wave a magic wand and have mixed incoming housing developments,” she said.

“You can look at mixed income housing in two ways,” Rouleau said. “One, you have a building. In that footprint, you have housing for people with mixed incomes.”

The other would be a neighborhood that has houses that are completely affordable and homes that are affordable to higher income families, she said.

Mixed-income housing is an important part of the vision for Columbia Pike, Karantonis said.

“The Pike should offer housing opportunities to all types of residents across all income levels. As a community we committed not to exclude any group of residents (either on the higher or lower end of the income scale), he said in an email. “It is a declared goal of the Columbia Pike Neighborhoods Plan to avoid the displacement of any of its current residents, and actually grow by attracting the most diverse population. The Pike revitalization project is in its essence a mixed-income corridor.”

Read more →
More Stories
Wellness Matters: Protect Yourself Against the Flu‘Coffee with a Cop’ Coming to Crystal City