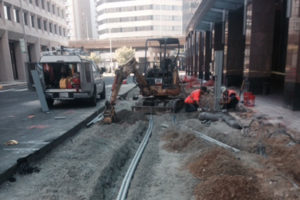 Construction on the Crystal City Potomac Yard Transitway will continue through the fall after being delayed by construction conflicts.

Arlington County is currently working with contractors to set a new completion date for the project, said county spokesman Eric Balliet, adding that the county will update the community once a schedule has been set.

The county is also holding a public meeting next week to give an update on transitway. The meeting on Oct. 8 will be held at the Residence Inn (2800 S. Potomac Avenue) from 6:30-7:30 p.m.

Currently, the county is working on new transitway lanes and on three of the new stations, Balliet said. Crystal Drive, S. Clark Street and S. Bell Street are affected by the road construction, he added.

The transitway project broke ground in July 2014 and was originally slated to take 10 months.

END_OF_DOCUMENT_TOKEN_TO_BE_REPLACED

More Stories
Morning Poll: How Are You Coping With the Rain?Open Houses in Arlington This Weekend