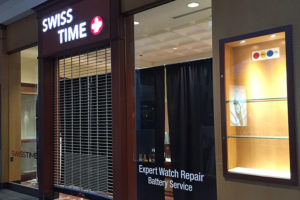 (Updated at 12:00 p.m.) Watchstyle, a luxury Swiss watch store, is closing down its store in Ballston Common Mall ahead of major renovations that are coming soon to the aging shopping center.

Kim changed the name of the store because the storefront at new location is much more visible to customers walking in the mall, and he wanted to emphasize the Swiss brands of watches he sells, he said.

The new store in the upscale Pentagon City small allows Kim to sell some of his higher-end luxury Swiss watches, he said. Watchstyle was already one of the most expensive stores in Ballston Common Mall without selling his full stock. At Swiss Time, watches will be priced at anywhere from a couple hundred to thousands of dollars.

Despite the new location and new name, Kim plans to honor warranties on watches bought in Ballston, and customer service will stay the same, he said.

“I worked very hard to be the only five-star rated watch store in Arlington, and I plan on keeping it that way,” Kim said.

The watch store owner plans to return to Ballston Common Mall once the mall is renovated. He anticipates opening his second Swiss Time around April 2018 in Ballston.

“The Ballston mall management has been very kind to me,” he said.