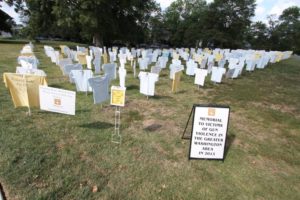 There will be 155 t-shirts on display on the lawn outside of the Rock Spring Congregational United Church of Christ starting Sunday, a memorial to those lost to gun violence in the D.C. area.

Each t-shirt represents a victim of gun violence in the District, Maryland and Northern Virginia in 2014. Each will have a name, age and date of death on it.

“The display is set up to encourage people to walk among the shirts and reflect on those victims and their loved ones,” Rev. Kathy Dwyer said.

The T-Shirt Memorial to the Lost will remain in place from Oct. 11-24. It’s part of a project led by Heeding God’s Call, an organization that advocates for “common sense” gun laws. The church has asked its members to help it set up the display after morning services this Sunday.

“It seems like every time we turn around there’s another act of senseless violence,” Dwyer said.

There will be 75 white shirts for D.C., 23 yellow shirts for Northern Virginia and 57 blue shirts for Maryland. Outside of the District, the victims are from places like Arlington County, Alexandria, Culpepper and Woodbridge in Virginia and Laurel, Ellicott City, Columbia and Gaithersburg, Maryland. Baltimore, which has a high rate of gun violence, is not included.

This is the second time the t-shirt memorial has been erected in Arlington, Dwyer said. First Presbyterian Church held the memorial last year. This year there are 11 fewer shirts.

Dwyer will discuss gun violence as part of her sermons on Sunday, Oct. 18 at 9 a.m. and 11 a.m. Members of the congregation have told Dwyer they want to do more than pray for a solution to gun violence, she said, a call that sparked the church to hold the memorial.

“[We see people] really reacting to the violence we see with more violence, and we want to be part of a different path,” she said.

The church has included national issues in sermons and discussions before. The church previously had talks about the intertwining of race and religion, which concluded this past Sunday.