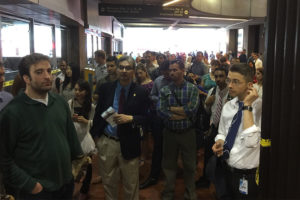 There has been no shortage of headlines lately about problems with the Metrorail system.

Chronic delays, minor incidents fouling up entire rush hour commutes and long waits on the weekends have become the norm with Washington’s once-gleaming subway system. It’s the result, many say, of deferred maintenance and a lack of investment in the system’s upkeep.

Metro says it’s trying to catch up, but even the maintenance is causing problems. This weekend alone, “reconstruction of the Metrorail system” will result in “service adjustments” on every line other than the Green Line. The Orange, Silver, Blue, Yellow and Red lines will all see 24 minute headways between trains.

Are you, personally, taking Metro less often this year as a result of less reliable service?