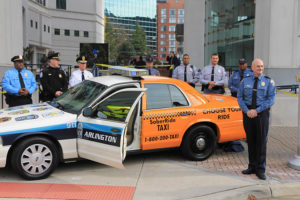 As it does on many particularly festive holidays, the Washington Regional Alcohol Program will be offering free taxi rides on Halloween through its SoberRide program.

In its press release (below), WRAP noted that nearly half of all Halloween traffic deaths in the U.S. are caused by drunk drivers.

As a means of making the Washington-metropolitan area’s roadways a little less frightening this Halloween, free cab rides will be offered to would-be drunk drivers throughout Arlington County, Virginia on the evening of Saturday, October 31st.

Offered by the nonprofit Washington Regional Alcohol Program (WRAP), the Halloween SoberRide® program will be in operation at 10:00 pm on Saturday, October 31st (Halloween) and operate until 4:00 am on Sunday, November 1st, as a way to keep local roads safe from impaired drivers during this traditionally high-risk, holiday period.

During this six-hour period, area residents ages 21 and older celebrating with alcohol  may call the toll-free SoberRide® phone number 1-800-200-TAXI and be afforded  a no-cost (up to a $30 fare), safe way home. AT&T wireless customers can dial #WRAP for the same service.

Local taxicab companies throughout the Washington-metropolitan area provide this no-cost service to local residents age 21 and older who otherwise may attempt to drive home after drinking.

“The scary fact is that nearly half (43%*) of all U.S. traffic deaths occurring during Halloween are caused by drunk drivers,”said Kurt Gregory Erickson, WRAP’s President.

More information about WRAP’s SoberRide® initiative can be found at www.soberride.com.