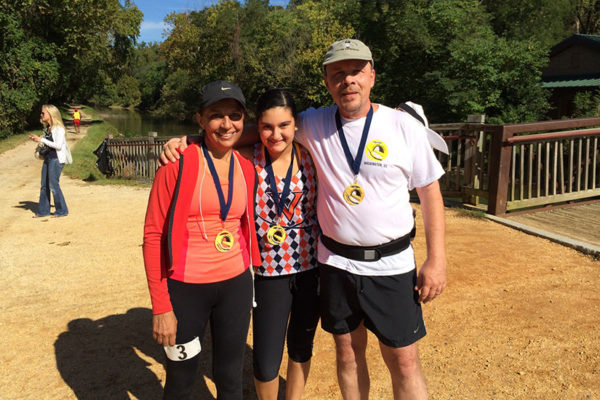 A 14-year-old Arlington resident will be the youngest female runner in this year’s Marine Corps Marathon. As if that wasn’t unique enough, she’ll be one of the few to be running the race with her entire family.

Ella Alliston and her parents will all be running the marathon, the first for any of the Allistons.

The Marine Corps Marathon is open to anyone 14 years old and up, said marathon spokeswoman Tami Faram. Alliston said that she was surprised she was the youngest runner but was happy she could compete in a marathon at her age.

“When my friends found out they had kind of the same reaction, they were like ‘wow you are so young, I can’t believe you are doing it,'” Alliston said.

Alliston and her mom, Martha, and father, Ross, have run multiple races since Ella joined Girls on the Run in third grade. Ella and Martha started running 5K races, and encouraged Ross to join them. The family has since completed multiple races, including a half marathon last year.

“We did a half marathon and we didn’t want to get out of our routine so we decided our next step was a marathon,” Ella said.

The family has been training for the marathon for at least 18 weeks, Martha said. To prepare for the marathon, the family would run three days a week, with long distance runs on the weekends, Ella said.

“For the last month or so we’ve been running a half marathon or more on Saturdays,” Ross said.

The Allistons have run all over Arlington and D.C. in order to find enough miles for their long runs. They’ve run around downtown D.C., up the C&O Canal Trail and through Georgetown.

“I really liked running downtown and around the monuments,” Ella said. “It was another distraction to look at the monuments and everything. It was flat and there weren’t many hills.”

The family takes turns picking out which trail they’ll run. Ross likes the C&O trail, while Martha likes to run the urban environment of the District, they said.

“We run almost everywhere,” Martha said. “We’ve been through all parts of downtown by the Capitol, the monuments, all through Arlington.”

During the week, the family runs up N. Glebe Road and Old Dominion Drive. Ella mapped out the exact routes that would meet the required mileage each week, Martha said.

After each run, the family heads home to shower and eat breakfast, a routine they plan to keep after the Marine Corps Marathon.

“We’ll probably head home. We have two little dogs we have to walk and then we’ll have lunch,” Ross said.

The family is looking forward to the marathon, they said, adding that they have already tested parts of the course, including the famous long first hill in Rosslyn.

“We’ve enjoyed training for it and we can’t wait to do the Marine Corps Marathon,” Martha said.