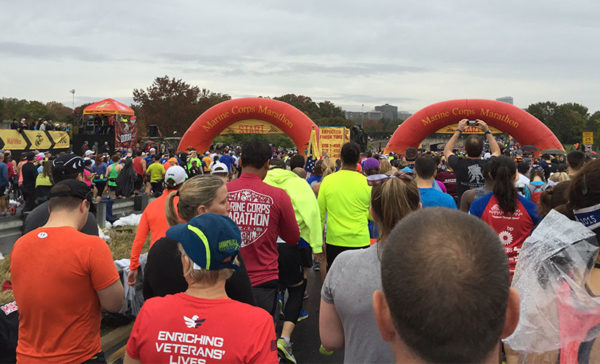 Marine Corps Marathon Wrap-up — Despite a soggy start, spirits were high for the 40th annual Marine Corps Marathon, which wound through Rosslyn, D.C. and Crystal City Sunday morning. The winners were a 22-year-old recent West Point grad, representing the Army team and, on the women’s side, a Costa Rica native who only started running seven years ago. [Run Washington, Stars & Stripes]

Orange Line Delays — Orange Line riders are experiencing delays of up to 25 minutes this morning due to a broken rail in Maryland. [Twitter]

School Bus Camera Tickets May Be Refunded — Arlington County is considering refunding tickets issued by stop arm cameras on public school buses, following a determination by the state Attorney General that the county doesn’t have the legal authority to issue such citations via mail. [Washington Post]

I Like This Park Because — Arlington’s Dept. of Parks and Recreation has erected two new chalkboard in Rosslyn Highlands Park, asking park users why they like the park. [Twitter]