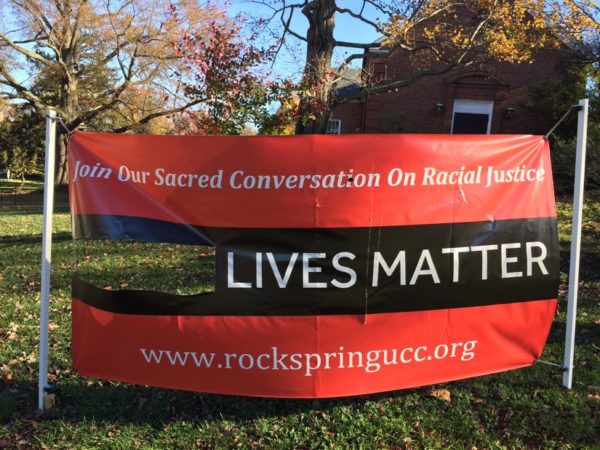 A “Black Lives Matter” sign outside of Rock Spring Congregational church was vandalized earlier this week.

The church, at 5010 Little Falls Road near Yorktown High School, says that the word “Black” was cut out of the sign at some point between Tuesday night and Wednesday morning.

“We notified the Arlington police and we have ordered a new sign to replace the one that has been vandalized,” Rev. Kathy Dwyer told congregants via email (below).

Rock Spring, which makes issues of social justice a cornerstone of its ministry, held a series of discussions about race and religion in September.

I am writing to let you know that at some point between Tuesday evening at 9:30 p.m. and Wednesday morning at 8:00 a.m. the sign we have on our lawn inviting people to join us in a sacred conversation on racial justice and stating that black lives matter was vandalized. The word “black” was deliberately cut out from the sign, as shown below. We notified the Arlington police and we have ordered a new sign to replace the one that has been vandalized.

Several people saw the sign or heard about the incident and have reached out. Elizabeth Woolford, a member of Rock Spring and a student at Yorktown High School wrote to me. With her permission, I share the following from her note, “I wanted to share that today is one of the days I could not be more proud to be a member of Rock Spring. I woke up this morning and a group message I am in with 10+ other Yorktown HS members were passionately discussing the recent defacement of our church’s Black Lives Matter sign. I just went on Facebook to discover that several different Yorktown students …had posted about their sadness for the continual resistance we’ve received from our sign. Rock Spring’s discussions and our stand on racial justice are reaching far beyond our church community. For these people, it is a sign (literally) that there are parts of the Arlington community that are working towards a better, just filled, and equal future, and prompting thought filled discussions amongst the future voters and politicians in the high school community. I hope that our sign will once again remain up, as our resilience to resistance is resounding deeply, especially with the teens I know, as a beacon of hope.”

We will continue to bear witness with faith and courage. Our next sacred conversation is scheduled for this coming Monday, November 16 at 7:30 p.m. in the Saegmuller Room.