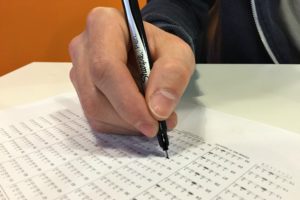 Yorktown High School will offer the Preliminary SAT in the spring for students with disabilities as part of an agreement resolving a complaint made by a Yorktown parent to the Department of Education’s Office for Civil Rights.

Typically taken by high school sophomores and juniors, the PSAT is a practice test for the SAT. Those with do exceptionally well could qualify for the National Merit Scholarship Program and win college tuition money.

Michelle Buehlmann filed the federal complaint in early October after her daughter was unable to take the PSAT earlier this fall.

Her daughter is a sophomore with a 504 Plan, an education plan for students who have disabilities but do not require special education services. In order for her to take the test, special accommodations that followed her 504 would need to be approved by the College Board, which coordinates the PSAT.

Applying for those accommodations is typically a responsibility taken on by the schools.

Buehlmann said once she realized Yorktown hadn’t applied and hadn’t informed her or her husband they would have to apply themselves, she filed the complaint.

“When I became aware that the school made the decision just to not apply and not tell us, I told them it wasn’t right and decided to file,” she explained. “It really was an honest misunderstanding and I’m sure a lot of it was miscommunication, but now we’re making sure something is done.”

Yesterday morning, Buehlmann and APS came to an early complaint resolution agreement in a meeting facilitated by the DOE. The agreement includes provisions for both Yorktown and the County to address this issue.

Not only will Yorktown administer the PSAT again in the spring for students with disabilities, but it also agreed to notify students and their parents about the test this week. In addition, the school will help them apply to the College Board for accommodations, a process that must be completed by Dec. 15.

In the long term, APS agreed to notify parents of 8th, 9th and 10th grade students with disabilities about the process to request accommodations by May 1 every year. They also agreed to train county school counseling staff on this application process.

Buehlmann said she was pleased with the complaint process overall and the final agreement they reached.

“Everyone handled the situation very well, and both agencies got their job done efficiently and effectively,” she said. “I think it’s a great example of how a large bureaucracy like the DOE and a big institution like APS can work well with parents to get a job done.”