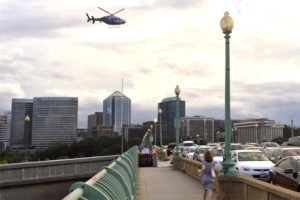 (Updated on 12/10/15) Community members will have another opportunity to express their concerns about noise pollution from aircraft in the region. This time, the topic is helicopters.

Arlington County Board member Libby Garvey will be hosting a community meeting on helicopter operations and noise on Wednesday, Dec. 16 from 7-9 p.m. at the Arlington Central Library auditorium (1015 N. Quincy Street).

She held a similar meeting over the summer to discuss noise from airplanes heading to and from Reagan National Airport. That meeting drew approximately 100 attendees, who heard from representatives of the Federal Aviation Administration and the Metropolitan Washington Airports Authority. The group addressed questions and comments regarding flight paths, hours of operation, types of aircraft and regional coordination moving forward.

This month’s meeting agenda also includes two representatives from the FAA, one from its Air Traffic Organization and another from the Office of Environment and Energy. Another confirmed guest is a commander of the U.S. Army Air Operations Group, and the list is expected to grow.

“We had an overwhelming response to the general aviation community meeting I hosted in the summer and I would encourage all of you to attend this meeting as well,” Garvey wrote in an email to constituents who had expressed concern about aircraft noise. “This will provide an important opportunity for us to not only understand the nature of helicopter operations in the region but will allow us to ask questions and have our voices heard to grow.”

The meeting is part of a “regular series of occasional updates on this issue” to continue efforts put into effect since the first meeting.

One of these efforts is the establishment of a Reagan National Airport Community Working Group — per a MWAA recommendation — that has met twice to discuss options to reduce or mitigate noise concerns in the region, according to an e-mail sent from Garvey to community members. The Working Group is made up of two community representatives from Arlington County, five of the eight Wards in D.C., Alexandria, Dranesville and Mount Vernon.

The County has also created an airport noise website as a dedicated resource for community members to learn about the issue and get updates on meetings.