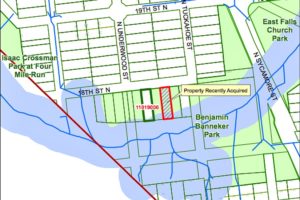 The Arlington County Board will consider the purchase of another parcel of land for the expansion of Benjamin Banneker Park, near East Falls Church, at its meeting this Saturday.

The property at 6616 18th Street N., near the park’s existing playground and adjacent to the W&OD Trail and Four Mile Run, is approximately 8,250 square feet.

The homeowner has already signed an Agreement of Sale with the county at a purchase price of $637,500. The agreement needs approval from the County Board to be finalized.

There’s a house on the property that is occupied by tenants of the owner. If approved, it will be demolished as part of the acquisition as it was not found to have historical significance.

According to the agenda item about the purchase, the county first expressed interest in this land in January. It is one of several parcels along 18th Street North identified in the 2005 Public Spaces Master Plan as land that could be acquired for the expansion.

It is also the second piece of land the County has moved to purchase this year.

In February, the County Board unanimously approved the purchase of 8,375 square feet of land at 6608 18th Street N., which is one property away from the one now awaiting purchase approval. That plot sold for more than $688,700 and also had a house on it when the county purchased it.