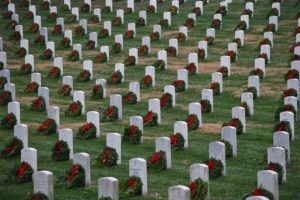 If you’re planning to volunteer to place wreaths on the headstones at Arlington National Cemetery on Saturday, expect big crowds.

Thousands of volunteers are expected to take advantage of the unseasonably warm weather and help place some 230,000 wreaths as part of the annual Wreaths Across America event.

Gates open to the public at 8 a.m. Saturday and an opening ceremony is planned at 9. The wreath laying is expected to begin at 10 a.m., followed by a closing ceremony at the Tomb of the Unknown Soldier at noon.

Metro says it will be operating on a normal weekend schedule Saturday morning, but all Blue Line trains — which service the Arlington Cemetery station — will be eight cars long in order to accommodate as many riders as possible.

“Arlington Cemetery Station is one of the smallest on the Metrorail system and can be expected to become crowded before and after the event,” Metro said on its website. “During peak crowding times, Arlington Cemetery escalators may be configured as ‘exit only’ before the event and ‘entry only’ after the event. Customers traveling in the reverse direction will be directed to station elevators.”

Metro riders should consider getting off at the Rosslyn station, from which Arlington National Cemetery is “a short walk to the south,” the transit agency suggested. Free shuttle buses will also be provided from the Pentagon Metro station to the cemetery.

Read more →
More Stories
The Catalogue for Philanthropy: Your Guide to Charities in WashingtonOpen Houses in Arlington This Weekend