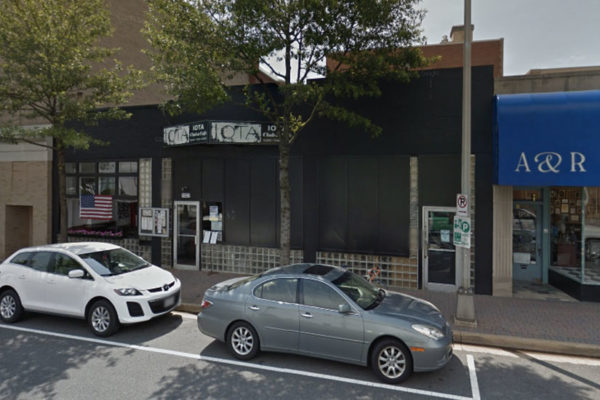 On Monday we reported that A&R Engravers, next door to IOTA, had closed its Clarendon storefront and moved to North Carolina. A&R had reportedly been given a Jan. 31, 2016 move-out date by the owner of its building, Market Common Clarendon owner TIAA-CREF.

IOTA’s building is also owned by TIAA-CREF. In a response to an inquiry from ARLnow.com, Inge said she was “sorry to see our good old neighbors move to North Carolina” but denied that IOTA would be forced to close anytime soon.

“IOTA is still rocking in the free world doing live shows — supporting local and touring musicians, hunting down those rising stars,” Inge said. “Stephen and I are still dedicated to doing the art thing as much as possible, fighting the good fight, especially on stage with many performances that send you to the moon and back.”

(Stephen Negrey is Inge’s brother and her IOTA co-owner.)

“IOTA serves a full menu featuring gourmet smasher sandwiches and craft brew — open Monday through Friday at 5:00 p.m. for Happy Hour until 7:00 p.m. and Saturday and Sunday for breakfast/brunch at 10 a.m.,” Inge noted. “IOTA is opening at 5:00 p.m. on Christmas Eve and Christmas Night.”