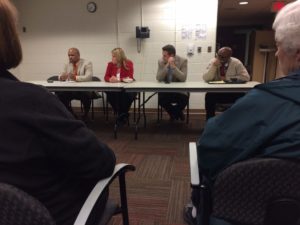 Those are just some of the issues with mail delivery and the post office in Douglas Park, residents say.

The neighborhood email listserv has been abuzz for months with reports of postal problems, and it’s not the first time the south Arlington community has experienced such issues.

Last year WJLA reported on mysterious mail problems in Douglas Park, including cases of mail that was inexplicably delivered several months too late, without so much as an explanation or apology.

On Wednesday night, four U.S. Postal Service officials addressed a meeting of the Douglas Park Civic Association to hear residents’ concerns. After some two years of off-and-on postal problems and two previous meetings with USPS officials, residents are frustrated to the point where they’re no longer reporting issues through official channels — only griping on the listserv.

“We’re just trying to desperately understand what we can do to get reliable mail service in this neighborhood,” said civic association president Adam Henderson. “The chatter I see on the listserv, quite honestly, a lot of people are so frustrated with the situation that they don’t want to call because they don’t think anything is going to be done.”

Postal officials apologized for the problems and promised action. They said the matter had made its way all the way to the top — to the U.S. Postmaster General.

“Douglas Park is definitely on the radar screen,” said Sharon Owens, Postal Service District Manager for Northern Virginia and the D.C. area. “Please let your community know that we are committed to improving it.”

A number of factors could be contributing to the erosion of mail reliability in the neighborhood.

Officials said the Postal Service is being hit by a wave of retirements — often leaving less experienced mail carriers who are still getting up to speed on their routes. Owens said USPS is trying out a pilot program to better train new mail carriers.

Another, more localized factor, has to do with topography. Douglas Park is hilly, with few businesses or large apartment buildings. That means that a mail carrier needs to walk for much of their route, which can be exhausting and makes the route less desirable. Because mail carriers with seniority are allowed to pick their routes, that has left a succession of less experienced mail carriers in Douglas Park, residents were told.

Walter Daniels, the local Postmaster, said he was surprised to hear of the problems, since the Postal Service had not been getting complaints about mail delivery in Douglas Park and thus assumed that the previous issues had been resolved.

“We’re in the business of customer service. I really am shocked,” he said. “It sounds like we’re having some mis-deliveries again. We will have to got back to the drawing board” in terms of employee training and “will start monitoring things more closely again.”

The officials also promised to improve customer service at the Arlington South post office, at 1210 S. Glebe Road, which has been the subject of a constant barrage of listserv and online complaints.

Residents, meanwhile, were encouraged to contact USPS when there are complaints about mail service. The Postal Service doesn’t have the resources to monitor neighborhood listservs, as at least one resident suggested they should do.

“We don’t monitor social media on a local level,” said Northern Virginia District Marketing Manager Anthony Prisco. “If residents don’t tell us, we at the local level don’t really have any way of knowing that something is wrong until we come to one of these meetings.”

Also brought up at the meeting: delivery of the Arlington Sun Gazette newspaper.

Residents asked why only part of the neighborhood received the paper for free, a question that postal officials said should be directed to the newspaper. Some speculated that the distribution area was determined by home values or other economic factors.

One elderly resident, who’s outside the distribution area and thus pays to subscribe to the paper, said she’s “frustrated as all get out” because her paper usually arrives late. Postal officials were unable to explain why she often receives her paper on Thursday instead of Tuesday.