A one-of-a-kind art installation is lighting up Crystal City this holiday season, paying tribute to the community’s history with a high-tech twist.

Crystal City Lights is a 25-foot wide, 10,800 LED interactive “chandelier” now being displayed at the park at 2121 Crystal Drive. The installation is audio-reactive, meaning the lights and effects change based on whichever song is played through the system.

It’s also the only 3D pixel-mapped chandelier in the world, says project creator Imaginex, using custom-built technology. It’s made of weatherproof, UV resistant LED light strips as well as custom software and hardware. Much of the display was custom fabricated with parts made from a 3D printer. 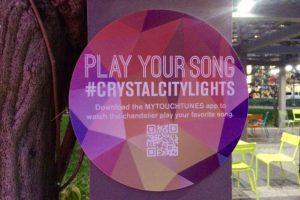 “It was originally programmed for that fist-pumping, EDM music, but we slowed it down a little bit and made it more holiday-friendly,” said Alan Curtiss, Director of Research and Development for College Park, Maryland-based Imaginex.

The installation defaults to playing and interacting with holiday music, though visitors can download an app when they’re at the park and request to play their favorite songs.

“We have a color-changing palette tool that we created with our in-house software,” Curtiss said. “We put in an algorithm that changes both the color sweep and the shadow effect, so we don’t know what’s going to happen. It randomizes every day with different shapes and patterns.”

The display is the product of the combined efforts of Imaginex and real estate developer Vornado, which has been busy remaking the image of Crystal City by bringing in innovative tenants to replace older government and military offices that have been moving out for the past decade. 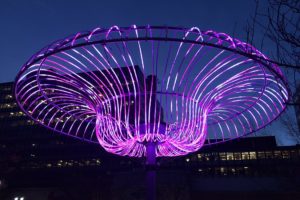 Incubators 1776 and Eastern Foundry now call Crystal City home, as does DIY workshop Techshop. Co-working company WeWork expects open its new Crystal City outpost in February, and is opening one of its first “WeLive” micro-unit apartment spaces in the same building later in the year.

As technologically advanced as the display is, the idea was inspired by Crystal City’s history, dating back to 1963.

The very first building in the area was called the Crystal House Apartments. According to a press release, the building of that lobby had an elaborate crystal chandelier, which was later the inspiration for name Crystal City. As the area continued to develop, it stuck.

The special LED chandelier display pays homage to those roots while inspiring some holiday cheer. It will continue to do so between 6 a.m. to 10 p.m. daily through February.