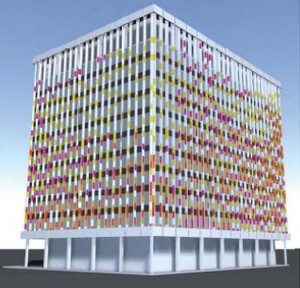 A vacant office building in Crystal City will become a unique apartment building under a plan approved by the Arlington County Board on Saturday.

WeWork, a company that specializes in co-working office space, plans to gut the 1960s-era office building at 2221 S. Clark Street and convert it into a community-oriented residential building featuring “micro-unit” apartments and large common areas. Many of the 252 apartments in the 12-story building will be 360 square feet or less.

“The Crystal City project will be WeWork’s first residential building, bringing the same benefits of co-working — shared amenities, a sense of community and opportunities for collaboration — to a residential building,” the county notes in a press release. “The project will offer an entirely new type of apartment living within walking distance of the Crystal City Metro Station, several bus stops and Capital Bikeshare stations, and will serve as a model for adaptive reuse of an outdated building until redevelopment can occur.” 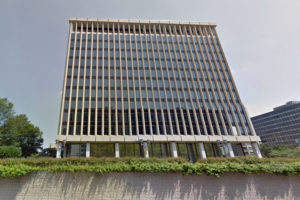 WeWork signed a 20-year lease with property owner Vornado. The building is expected to be torn down after WeWork vacates the space, making way for a realignment of S. Clark and Bell Streets, as called for in the long-range Crystal City Sector Plan.

“This temporary conversion of an aging, vacant office building into an innovative live-work space is an example of how we continue to reinvent Crystal City as a more attractive, vibrant place that will attract more entrepreneurs and tech workers,” Arlington County Board Chair Jay Fisette said, in a statement.

In addition to extensive interior renovations, the building’s exterior “fins” will be painted with stripes of bright colors, an “experimental exterior color application” that will change in appearance as one moves around the building. Apartment dwellers will have access to 154 parking spaces and 94 bike parking spaces.

The project’s community benefits include “streetscaping, sidewalk improvements on 23rd Street, and outdoor areas including, play and lounge zones and a community garden.”

Dubbed “WeLive,” the apartment conversion is one of several tech-oriented projects happening in Crystal City, including the opening of the TechShop and the Crystal Tech Fund.