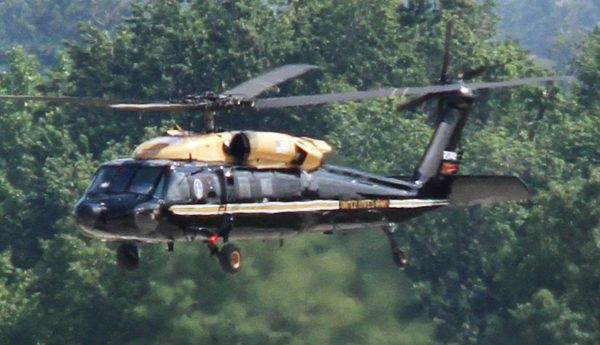 In the first community meeting dedicated to discussing helicopter operations and noise in Arlington, residents found their concerns stuck between federal air traffic regulations and required military practices throughout the metro area.

The meeting’s panel included representatives from the Federal Aviation Administration and the military, including the Air Force, Army, Marine Corps and Coast Guard.

“It’s definitely our intent to fly friendly and to support the local community as much as possible,” Colonel Timothy Brown said at the meeting. Brown is a Commander in the U.S. Army Air Operations Group.

“This is a great feedback opportunity for us to take lessons and really work on training and communicating with our pilots so that everyone is able to support this goal as much as we can within the restraints of the airspace that we’re operating in,” he added.

However, as residents and representatives from neighborhoods closest to the airport shared their concerns, a disconnect between FAA regulations and military operations became clear, making it difficult for the selected panel to properly address questions.

“We monitor and grant approval in and out of the airspace, but we take care of civil aircraft in that area,” said Rebecca Cointin of the FAA’s Office of Environment and Energy. “I want to make it clear that we do not have a lot of regulation over noise produced by military aircraft. The FAA does not control, certify or regulate them.”

According to the panelists, 75 percent of the air traffic in the area is military, and the remaining 25 percent is law enforcement, medical evacuations and the civil aircraft Cointin referred to.

What the FAA does regulate is safe areas in which military aircraft can operate so as to not come into conflict with the civilian aircraft. The military has determined routes in the approved airspace for helicopters flying in and out of Reagan National, including along Route 7 and Route 1.

“We fly the route structure we do because it’s the safest way to fly in that airspace,” the Marine Corps Commander said, using a road analogy to explain why military aircraft tend to fly on either side of corridors like I-395 rather than directly above it. “When we’re flying those routes, they’re like highways in the sky. Unfortunately, we don’t dictate them. We operate via the FAA. We’re just the operators trying to fly in the safest, most efficient manner.”

As the discussion continued, fingers pointed to the U.S. Department of Defense, which regulates military missions, training and how its aircraft operate. It also became apparent that while neither aircraft operators nor the FAA alone could change the flight routes, residents also didn’t have an outlet to share their concerns.

“What I’m looking for is a way for people to let you know when it’s really a problem,” Garvey said. “I’m guessing this might not exist right now, but it might be something we can work on.”

With that in mind, residents shared their ongoing frustrations with noise and accounts of excessive helicopter traffic.

“We have a division here between your missions, which are valid,” one north Arlington resident said. “The matter of fact is we honor that and the roles you have to play. They’re difficult, but there’s a problem between your respective roles and the role of the FAA.”

One Shirlington resident of nearly 30 years shared her frustration with loud, seemingly low-flying helicopters over her neighborhood.

“You keep saying [these operations] are ‘mission critical’ but that should also respect those you’re protecting,” she said. “You wouldn’t have all these people and all these complaints on a regular basis if, in fact, you were paying attention and catering to them all.”

Others proposed solutions to try and chip away at the struggle between regulators.

“I’ve heard a lot of useful information about the complexity of combining defense needs, FAA needs and civilian needs,” an Ashton Heights resident said. “I feel that if there was some kind of civilian-military working group, it could be a really good next step.”

A statement from the Ashton Heights Civic Association shared at the meeting suggested a noise monitoring program to gather data about flights in the area over time to try and eliminate “unnecessary flights while maintaining necessary operations for public safety and other worthy public goals.”

The panelists responded to questions and concerns openly, explaining regulations and policies. All stressed a commitment to fulfilling their respective missions, staying safe and reducing the impact on the community.

“Feedback is a gift, and what you’ve given us tonight is some fantastic feedback for how we can look at our operation and how we can better integrate and support the community,” Brown said.

The FAA also expressed interest in resolving these issues.

“This is something that we don’t take lightly,” Ed Donaldson of the FAA Air Traffic Organization said. “Great information has been passed along here and we will definitely take a look at it to try and address some issues.”

Garvey was pleased with the open conversation and vowed to continue it in the future.

“These [panelists] are all expressing a willingness and have shown you really are aware we don’t like the noise and you’d like to do something about it,” Garvey said. “Our community has very little information regarding helicopter routes, operations and procedures. I think we have a little bit more of that now.”

For now, the panelists recommend residents contact the Department of Defense Noise Working Group with noise complaints and concerns of aircraft operating improperly in residential areas.