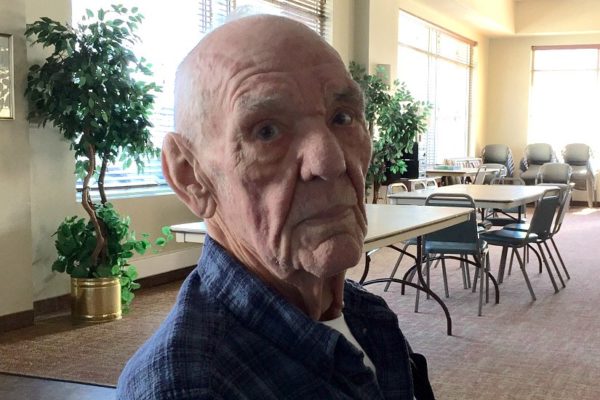 Arlington native Marvin Spencer Binns fought his first fire as a teenager. He liked it, a lot. For the next six decades, he kept plugging away.

“I’m a fireman,” Binns said not too long ago.

On Monday morning, the long-time president of the Cherrydale Volunteer Fire Department passed away following a lengthy illness. He was 80.

Until the end, Binns kept a two-way radio chattering in his room at The Carlin retirement home near Ballston. When he heard an emergency call originating from the 10-story complex, he would march downstairs to aid the arriving Arlington County Fire Department crews.

“I can’t put the gear on, and my knees are terrible,” Binns allowed, “but I can still go and do things.”

Binns’ remarkably durable volunteer career earned him a unique reputation. Tellingly, in a county where relations between volunteer and career firefighters have not always been harmonious, ACFD Honor Guard members stood watch in early March during a public viewing for Binns’ late wife, Betty.

“There are certain volunteer members over the years who have been accepted into the career family,” noted Capt. Randy Higgins, a career Arlington firefighter at Fire Station 2 who has known Binns for many years. “Marvin was always around, pitching in and helping out.”

Born in Arlington on March 20, 1935, Binns attended Washington-Lee High School and, later, vocational school in Manassas. By the time he was 16 or so, he was starting to hang out at the Cherrydale station, home to the county’s oldest volunteer fire organization.

The two-story, red-brick station dedicated in 1920 held multiple attractions for Binns. Some nights, he would just sit outside while music floated down from the weekly dances held in the upstairs social hall. Binns would also listen to the career and volunteer firemen chewing the fat while awaiting a summons.

Though Arlington County had initiated a career fire department in 1940, volunteers still responded to emergencies, sometimes informally. When he was 16 and still too young to join, Binns drove himself to Rosslyn on the bitterly cold night of Dec. 30, 1951 to pitch in on the fight against a devastating fire at the Murphy & Ames lumber yard.

“I went to a lot of fires,” Binns recalled, “and I wasn’t even a member of the fire department yet.”

When he turned 18, Binns paid $5 and formally joined the Cherrydale department. There was no particular school to attend; the learning was hands-on and experiential. At the training academy, officers would set fire to hay bales or old tires and the men would enter the burn house with only rudimentary protection.

“You couldn’t see a foot in front of you, it was so black,” Binns recalled.

Binns moved into the Cherrydale fire station for a time before he joined the Navy in 1957 and served as a baker aboard the USS Norfolk, a destroyer leader.

It wasn’t always sweetness and light. Tensions sometimes arose between the career guys and volunteers. The volunteer department sometimes struggled financially or administratively; the old fire station, some neighbors occasionally opined, could attract rowdies. Sometime in 1967, Cherrydale historian Kathryn Holt Springston recounted in her history of the Cherrydale department that Arlington officials received complaints that firefighters were whistling at women passing by.

“All were asked to stop such practices,” Springston reported.

Binns could spin a yarn; he had plenty of stories from his decades of service. The way the old siren would wail, summoning volunteers. The winter calls that would leave the firefighters covered in ice. The two dead sisters he helped carry out of the house near Washington Golf and Country Club; some bad, bad car accidents.