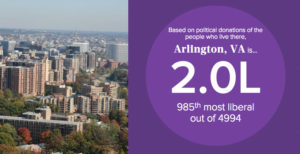 Arlington has a long-held reputation for being one of the bluest bastions of Democratic politics in the country. But is that perception accurate?

At least one ranking of political allegiances suggests the answer is no.

The political data startup Crowdpac recently ranked nearly 5,000 cities in the U.S. with a population over 6,000, based on political donations of residents. Each locale received a ranking of how liberal or conservative it was, based on those donations.

Parts of Arlington, particularly those in the far northern reaches of the county near McLean, tend to vote more conservatively, though the vast majority of the county is reliably blue on election day. One notable exception was the 2014 election of John Vihstadt, the first non-Democrat elected to the County Board since 1983.