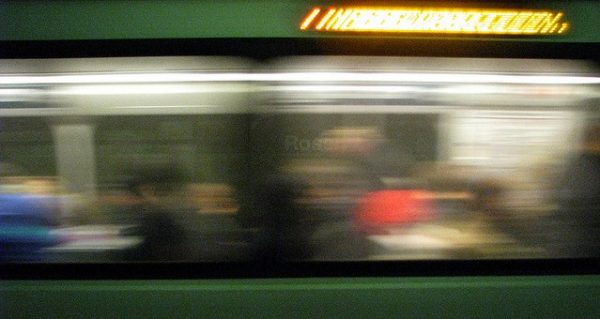 Yesterday’s evening commute for Ballston resident Andrea Gagliardi was following the normal routine, until she found herself helping a disabled man find his way home.

The man — who Gagliardi described as approximately 50 years old, mute and mentally disabled — was being helped by another woman when she arrived at the Courthouse Metro station. That woman was visibly upset, saying someone had dropped him off at the station, leaving him to figure out how to get to an address written on the back of a business card.

“I couldn’t believe someone had just left him,” Gagliardi told ARLnow.com this morning. “The other woman was truly an angel for finding him and initiating the help because I might not have noticed him if she hadn’t called me over.”

“I offered to take him on the train since I was going that direction, hoping there would be police at my station,” she said. “I wasn’t going to try and take him to the address. It could’ve been any place that wasn’t safe for him or me to be.”

“I didn’t feel threatened by the man at all,” Gagliardi added. “He was pleasant and friendly throughout the trip. I just think he was embarrassed, so I kept ensuring him we would figure it out together.”

“The manager led him away from the crowds, so I left the station looking for a police officer, but no such luck,” she said. “I knew I had done the right thing, but I started feeling guilty thinking I should’ve stayed and made sure he was okay. If I could do it again, I would’ve stayed.”

The incident Monday was the third time in a little over the year Gagliardi has come to the assistance of someone in need at an Arlington Metro station. The first was an intoxicated man who almost fell onto the tracks, and last month a woman was stuck on an elevator.

“At first I thought why does this always happen to me,” she said. “But in each of the three scenarios I’ve been involved in, there have been other people also helping.”

Gagliardi is a contractor for the U.S. Department of Homeland Security, an agency that touts the value of “See something, say something.” She also took a course in college called “Disability?” that taught her how to better understand people, both with and without disabilities.

Gagliardi said these experiences and her own morals put her in a good position to help the man Monday evening. She hopes that others would do the same.

Approximately an hour after posting her encounter with the lost man on social media, Gagliardi got the response from Metro officials she was hoping for.

According to a Metro spokesperson, the station manager notified Metro Transit Police about the situation shortly before 5:30 p.m. They transported the man to the address to ensure his safe arrival before confirming the address was, indeed, his residence.

Gagliardi commended Metro officials for their response and helpfulness, its special services like MetroAccess, and their frequent safety announcements, including the one that recites Metro Police’s phone number — which Gagliardi has memorized.

She also hoped her story would raise awareness of services available in the D.C. area to people with disabilities — like Red Top Cab’s discount program — and opportunities to ensure safe transportation with companies like Uber. With such services, those caring for disabled individuals should never have to send them off to rely on the kindness of strangers to get to their destination.

“Though this story had a happy ending, it easily could have not,” she said. “I hope people pay more attention to what is happening around them because you can help someone. Don’t assume someone else will do it, even if all you can do is the police or notify officials around you.”

“Anyone can help,” Gagliadri added. “Don’t be a bystander. Do it yourself. That could be you someday.”