The pace of road paving in Arlington has more than tripled in the past five years, according to newly-released stats.

Arlington County made “significant investments in road paving in 2015,” the video says, calling it “a banner year for roadwork.” The total cost of the paving program last year: $13 million.

The previously lethargic pace of road paving, combined with a number of unusually harsh winters, led to complaints from residents that Arlington’s roads were in poor shape, especially for a county that prides itself on providing a high level of government services. 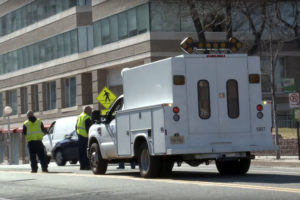 The tide started to turn with the adoption of the FY 2013-2022 Capital Improvement Plan, which called for paving at least 72 lane miles per year to put the county back on an engineer-recommended 15 year paving cycle. Arlington has a total of 974 lane miles of county-maintained roadway.

“The 91 lane miles we paved in 2015 was a doubling of our effort compared to 2012,” Moon said. “It was a significant effort and we’re really pleased with how the paving program went this year.”