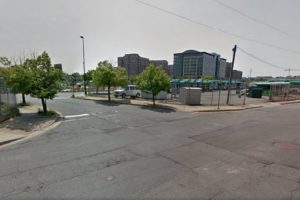 The small street connecting S. Eads Street and Route 1 in Crystal City will permanently close at the end of next week to make way for an upgraded Arlington Rapid Transit (ART) bus facility.

On Friday, Jan. 29, 32nd Street will close. The tiny road is between two existing ART bus parking lots at 3201 and 3175 S. Eads Street. The combined pieces of land will create the new site for the bus facility.

The County Board approved the $14.2 million project in May, and construction began in September. When complete, the new facility will include a two-story building, a bus wash bay, a light maintenance bay, storage, parking and four compressed natural gas fueling stations.

The decision to close 32nd Street was approved at the same meeting as the new ART facility approval. In a report for that item, county staff determined “the Abandoned Street is no longer needed to provide public access from Jefferson Davis Highway to South Eads Street.”

The next closest street connecting S. Eads Street to Route 1 is via S. Glebe Road, which is approximately 0.2 miles south of the construction site.

Construction on the new ART facility is scheduled to take about 18 months and is expected to be completed in 2017.

END_OF_DOCUMENT_TOKEN_TO_BE_REPLACED

More Stories
Morning NotesLetter to the Editor: What Do Dave Grohl and a Concrete Factory Have in Common?