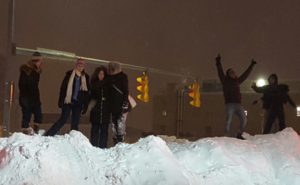 The Office of Personnel Management announced Monday night that federal offices would remain closed Tuesday, though “emergency and telework-ready employees required to work must follow their agency’s policies.”

Arlington County government offices, facilities and courts — with the exception of General District Court — are scheduled to reopen at noon on Tuesday.

“Unscheduled leave and telework options are encouraged for County employees, with supervisor’s approval,” the county noted in a press release.

Trash and recycling collection, meanwhile, is also still suspended, but may resume on Wednesday.

County snow crews and contractors are continuing to work around the clock to clear snow and ice from local streets.

“County crews are now deep into Phase 3 of snow cleanup operations, focusing on residential streets,” the press release said. “In many areas, crews have had to bring in heavy construction equipment to break through snow/ice banks at the ends of streets so plows can get in.”

“The goal is to get to all neighborhood streets by Tuesday night but it may take until Wednesday, Jan. 27, to reach some sections given the amount of snowfall and related conditions, including buried parked cars,” the press release continues. “County officials are asking residents for continued patience as enormous amounts of snow are removed from roadways and, in many cases, transported miles away.”

The county’s snow removal ordinance remains suspended “because of the massive amounts of snow that fell on area sidewalks.”

“No citations will be issued during the cleanup,” the county said. “However, the goals behind the ordinance remain… so all efforts to clear sidewalks for the community are appreciated.”

Among the county officials getting back to work on Tuesday will be members of the Arlington County Board.

“The Arlington County Board will convene as scheduled Tuesday, Jan. 26, at 3 p.m.,” said the county press release. “It will defer consideration of both the January Consent and Regular Agendas to the Recessed Meeting now scheduled for 6:30 p.m. Thursday, Jan. 28.”

Next
Clear Sailing on Local Highways This Morning