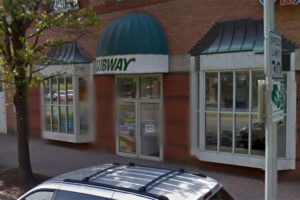 (Updated at 3 p.m.) The owner of a Subway sandwich store in Clarendon has pleaded guilty to a tax evasion conspiracy and could face up to five years in prison.

Federal prosecutors say 49-year-old Alexandria resident Obayedul Hoque conspired with managers at a number of Subway stores and a gas station he owned to keep some $6.5 million in sales off the books between 2008 and 2013. Hoque’s company dodged between $1.5 and $3.5 million in federal taxes as a result of the conspiracy, prosecutors said.

Among the seven Subway locations Hoque owned in Arlington, Alexandria and D.C. is the shop at 3000 10th Street N. in Clarendon. That store has remained open. Hoque also owned a Shell station on Duke Street in Alexandria.

Hoque pleaded guilty today and is scheduled to be sentenced on May 13. The full press release from the U.S. Attorney’s Office, after the jump.

Obayedul Hoque, 49, of Alexandria, pleaded guilty today to charges of conspiracy to defraud the United States.

In a statement of facts filed with the plea agreement, Hoque owned and operated a gas station in Alexandria called Skyhill Shell and multiple Subway restaurant franchises in Alexandria, Arlington, and Washington, D.C. Hoque admitted that between 2008 and 2014, he and his co-conspirators, who were managers of some of the Subway franchises and the gas station, conspired to defraud the United States for the purpose of obstructing the IRS in the ascertainment and collection of individual and corporate income taxes. Hoque and his co-conspirators did not deposit all of the gas station or the Subway franchises’ gross receipts into the corporate or partnership bank accounts. Instead, Hoque and the managers retained a portion of the gross receipts for their personal benefit and failed to report those funds to the IRS. For the Subway franchises that had no co-conspirator managers, Hoque retained all of the unreported gross receipts for himself.

For the period of 2008 through 2013, point of sales records for the Subway franchises reflected total sales of $20,805,667. However, Hoque and his co-conspirators provided false monthly sales figures to the accounting firm to prepare the Subway entities’ tax returns. As a result, Hoque and his co-conspirators caused false corporate and partnership tax returns to be filed for the Subway franchises, which reported sales of only $14,377,696. Hoque and a co-conspirator also caused false corporate tax returns to be filed on behalf of Skyhill Shell. For some years, some of the entities did not file tax returns with the IRS. Hoque also filed false individual income tax returns with the IRS. Hoque admitted that his conduct caused a tax loss to the IRS of between $1.5 million and $3.5 million.

Hoque faces a maximum penalty of five years in prison and a fine of $250,000 when sentenced on May 13, 2016. As part of his plea agreement, Hoque agreed to pay restitution to the IRS for tax liabilities for the years 2008 through 2013. The maximum statutory sentence is prescribed by Congress and is provided here for informational purposes, as the sentencing of the defendant will be determined by the court based on the advisory Sentencing Guidelines and other statutory factors.

Dana J. Boente, U.S. Attorney for the Eastern District of Virginia; and Caroline D. Ciraolo, Acting Assistant Attorney General of the Justice Department’s Tax Division, made the announcement after the plea was accepted by U.S. District Judge Liam O’Grady. Assistant U.S. Attorney Uzo Asonye is prosecuting the case along with Assistant Chief Caryn Finley and Trial Attorney Kimberly Shartar of the Tax Division.