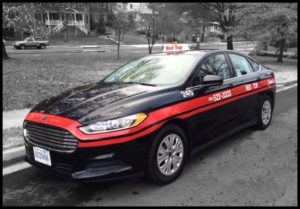 Arlington’s Red Top Cab, which celebrated its 50th anniversary in 2014, has unveiled a new look for its taxicabs.

The new Red Top paint job for its fleet of Ford Fusion cabs is black with a red stripe. It’s the first color scheme change in the company’s history.

“We aimed for a look that is crisp and contemporary,” said Red Top Marketing Director Von Pelot. In a press release, the company said other changes are helping it to compete with its bitter rival: international tech darling Uber.

The changes at Red Top Cab are more than skin deep. Red Top now offers its customers the choice of two apps, both of which have features not found in the larger “rideshare” company’s app. The Red Top Cab apps allow customers to make advance reservations in addition to booking a ride for right away. Red Top says that this feature means that when passengers are ready to go, they don’t have to wait for their ride — their ride is waiting for them.