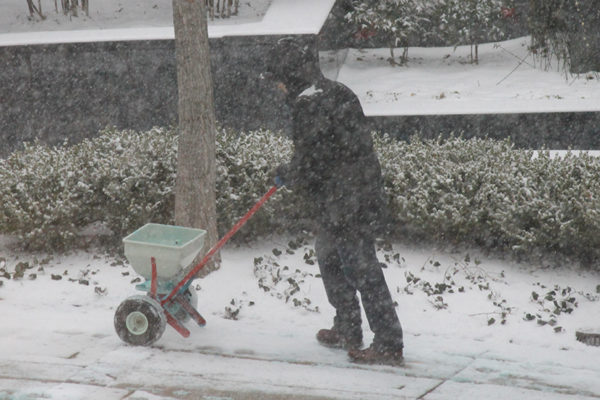 The following letter to the editor was submitted by Abby Olin, a Falls Church resident, regarding the local snow removal effort.

Since you recently gave a platform to readers frustrated with the snow-removal progress, I want to take a moment to briefly thank everyone who has contributed to the advanced preparation and snow clearing efforts so far.

Given the snow fall totals and the thousands of miles of road surfaces, Arlington County and other nearby counties have done an admirable job so far.

In the days before the storm arrived, my local Safeway called in extra cashiers, and while my wait time wasn’t exactly short, it was clear they were doing everything they could to ensure their customers were prepared for the storm. My vet was flexible and helped squeeze in my appointment early so my dog didn’t have to wait the whole weekend with an ear infection. The staff at my apartment complex did everything it could to keep the sidewalks clear, shoveling multiples times during the day over the course of Friday and Saturday.

On Sunday, a plow came and got stuck for more than eight hours. I saw several neighbors working to help the plow driver dig out. I didn’t have a shovel, so my contribution was to bring them hot cocoa. From the week leading up to the storm until Sunday, I was struck by how neighborly the residents of Arlington and Falls Church became — I saw neighbors helping to dig out others’ cars, grocery store customers encouraging a mother with several small children to pass them in a long check-out line, and a steep increase in friendly small talk all over town.

Since Monday, however, the tone has largely shifted in a negative direction — complaints about unplowed streets, annoyance with local school districts’ decisions, and a general frustration in regard to how tax dollars are spent. These are all valid concerns, and as a community we should continue to seek resolutions, but I wonder if it might be easier to if we thwart our reflex to find fault and instead exhibit the “pull together” attitude that was on display all last week.