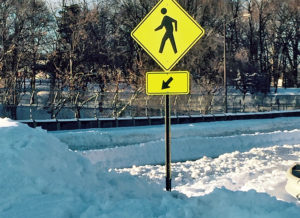 It’s generally agreed that it would take awhile to recover and clean up from this past weekend’s historic blizzard, which dumped some two feet of the snow on Arlington. But that’s not stopping a myriad of complaints from rolling in.

Since the storm county crews and private contractors have been working in shifts around the clock to clear roads, sidewalks and parking lots. As expected, even today there are plenty of examples of places untouched or barely touched by snow crews.

Some Arlington residents — especially those along major arteries and Metro corridors — have had their street cleared to the point where it’s drive- or walk-able. Others, especially those in single-family home neighborhoods, have not been so lucky.

As of 1:30 this afternoon, Arlington County said half of all residential streets have been plowed. Snow crews have been working for 92 straight hours, the county said.

Some residents who remain snowed in are taking the “keep calm and carry on” approach. Others, however, are upset and are expressing their displeasure on TV, on social media and in emails to ARLnow.com.

After the jump: some of the letters — and photos — sent to ARLnow.com by local residents.

ArlNow should do a story on the horrific walking conditions in Arlington. While bike paths are scrubbed to the asphalt and streets are plowed multiple times, county-managed sidewalks remain untouched, making for extremely hazardous walking conditions.

Here’s a photo to illustrate the issue [above -ed.] – shot at 1425 N. Quincy Street where the county hasn’t cleared sidewalks across I-66, forcing pedestrians into the street, and a pile of snow dumped on the sidewalk and crosswalk at Quincy by Bill Buck’s plowers at 1425 N. Quincy. 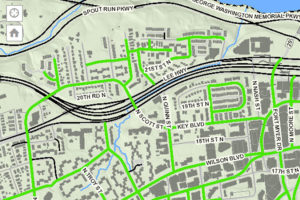 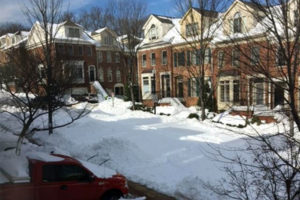 Rick sent the photo above, of the 1500 block of 22nd Street N., and wrote the following:

We have a secondary road running through our neighborhood that provides access to hundreds of townhomes and apartments. Since the snow started, we have not seen a single plow. I have filed multiple snow issue forms and now they say on the snow plow map that the road has been cleared. Obviously, that is not true. Here are pictures.

I would like to report that I live on 23rd Road North and the county ‘interactive’ plow tracker map is incorrect. Currently the map indicates my street has been plowed. Obviously Arlington County supervisors are not back checking work and now Arlington County thinks the street is plowed.

Hard to believe all the bordering streets to 23rd Road North have been plowed. We are one block from Lee Hwy.

How does Arlington prioritize what neighborhood / secondary roads get plowed first? Is there some Arlington County lottery snow removal signup our street missed?

Once again, the Arlington County government has proven to be completely tone deaf when dealing with residents. The duality of hiding under the parasol of being a sleepy Southern town the government of which cannot properly plow after snow in a timely fashion while acting high handed to our needs reached new heights after the blizzard.

Just hours after the snow stopped falling this week, the county issued emergency text alerts and Facebook postings reminding residents that they had until Monday noon to clean off their sidewalks. Citing some ridiculous ordinance requiring they clear the entire width of sidewalks 36 hours after a snowfall of six inches or more, the county completely failed to take note that they had neither plowed or even looked at most neighborhood streets.

Unlike Mayor Bowser in Washington, D.C., Arlington officials neither waived this ordinance nor originally gave residents a few more days to comply. (After some outcry they did say they wouldn’t cite anyone until the 27th. I suppose we were to be thrilled with that.)

When challenged, the County tried to hide under the hard work of the emergency workers and plow truck operators asking for our patience with street clearing. Understanding the pressure the plow crews and emergency workers were under was not issue. These people are doing an incredible amount of work with apparently an inadequate supply of equipment and a lack of proper training. The issue is with the total lack of understanding, feeling or awareness on the part of those officials responsible for not only issuing such an absurd ordinance but for sending out warning notices even before plowing commenced in most neighborhoods.

If Arlington wishes to have a snow removal ordinance, here are some steps needed for improvement:

1. Give homeowners 36 hours from when the County does their job – that is removing snow and trash. Often when the trucks do come through they toss the snow back into the sidewalks making the residents’ work mute.
2. Purchase enough equipment to deal with our blizzards which we have with regularity.
3. Teach drivers how to maneuver in blizzard conditions to prevent them from being stuck and how to bank snow so it doesn’t fall back on sidewalks as much as it now does or block cleared driveways.
4. Work with neighborhood associations to identify elderly and disabled residents and establish an active and ongoing program to organize people to assist with their snow removal and other emergency needs.

Since raising taxes doesn’t seem to be an issue in the County, I am sure it can find money somewhere to accomplish these goals. At the very least, striking a sympathetic and apologetic cord while they figure out how to do their own job would be a nice start.

Instead of complaining about road conditions, Chris wrote to question Arlington Public Schools’ decision to close for at least three days this week:

I’m a big fan of the site, and I wanted to suggest a topic for an article. This week the Arlington Public Schools announced that schools will be closed due to snow Monday, Tuesday, and Wednesday. I think many people are wondering why. The basic premise for the article would be to investigate what would be required for the Arlington schools to reopen sooner after it snows. Many parents I talk with in the county often wonder why schools in New York can open so soon after a snow storm, but Arlington County remains closed. Is it a question of money: do we not allocate enough to plows and trucks? (And if it is, isn’t Arlington County now reporting the streets will be plowed by the end of day Tuesday?) Is it a question of political coordination: do we need all the streets in surrounding jurisdictions to be plowed so that all the staff at the schools could safely travel to work? Is it something else entirely? I think it’d make for a great article, and spur good discussion and debate in the community.

Finally, Brian sent the following photo over the weekend of some snow writing on the athletic fields along S. Joyce Street, near Pentagon City. The snow writer’s beef was with the current Republican presidential frontrunner. 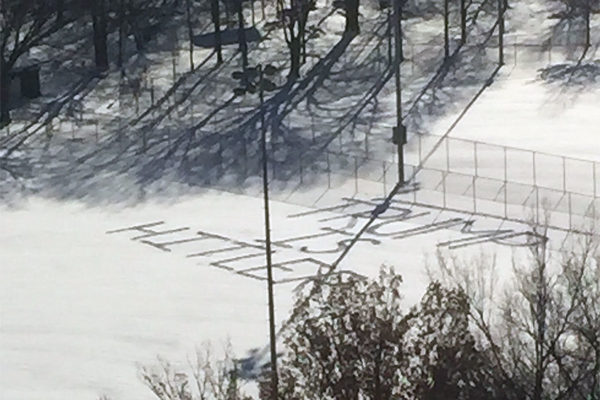