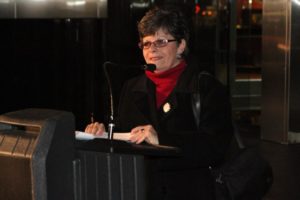 Cassidy was formerly the executive director of the Rosslyn Business Improvement District. She retired from that post in 2013.

In a press release, after the jump, CPRO notes that Cassidy is a longtime resident of Arlington Village, along the Pike.

The Columbia Pike Revitalization Organization (CPRO) has chosen an experienced Arlington business district leader as interim executive director while it searches for a replacement for Takis Karantonis, who resigned in January.

“Cecilia not only has the experience to maintain our programs and fulfill our obligations, but is also a resident of the Columbia Pike community,” said John Murphy, president of Washington Workplace, who is chairman of the CPRO board of directors. “We are lucky she was available.”

Cassidy, who retired from the Rosslyn BID in 2014, will be responsible for ensuring CPRO’s continuity and visibility with Columbia Pike businesses and residents, and with Arlington County officials.

“As a longtime resident of Arlington Village, I have watched the Pike grow and change dramatically,” said Cassidy. “For the past 20 years, I’ve also been professionally affiliated with CPRO’s executive directors in my own role first as executive director of Rosslyn Renaissance and then the Rosslyn BID.

“I am very excited to be of assistance.”

With the long-sought development well under way, CPRO will turn more attention to expanding events that draw the community together for entertainment and interaction. “Columbia Pike is one of the most culturally diverse neighborhoods in the world and we want to provide more opportunities for people to get to know each other,” said Murphy.

CPRO’s stated mission is “to champion and connect business and community along the Pike.” It has done that with a series of annual events that include the popular Blues Festival, Summer Outdoor Movie Nights, Holiday Bazaar, Home Show, and Farmers Market. In 2015, CPRO staged the first Fall Beer and Wine Festival, which was so well attended that it is already on the list of annual events.

CPRO will be working with Arlington County officials to expand the list.

Additionally, CPRO has always been a clearinghouse for information about business and county activities that affect the Pike. That role continues, Murphy said, adding that community forums on topics of interest, such as transit, will be scheduled.

“Many recent projects have already transformed the Pike, and there’s much more in the pipeline”, said Murphy. “Now it’s time for CPRO to start a new phase, which will unite the Pike’s neighborhoods through activities and events, and build an even stronger community.”