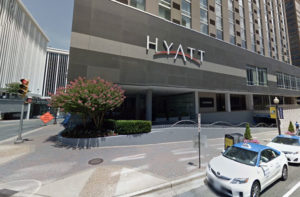 (Updated at 4:30 p.m.) An Arlington woman spent part of Valentine’s Day in jail after police say she stole a car following a trip to a local taco restaurant.

Samantha, 22, told police she was intoxicated when she took an Uber to District Taco in Rosslyn Saturday night, intent on grabbing some food. Afterward, she walked down to the Hyatt hotel, on the 1300 block of Wilson Blvd, milled about a bit and then allegedly stole a car from the valet.

Samantha’s next recollection, according to police, is waking up in the back seat of the car around 1 a.m., in an unknown location in Arlington. She then drove home, went to sleep, and called police around 9 a.m. to come clean about what happened, said ACPD spokeswoman Ashley Savage.

Samantha has been charged with grand theft auto and was held on a $2,000 bond, according to a crime report.

RECOVERED STOLEN AUTO, 160214016, 1300 block of N. Wilson Boulevard. At approximately 9:54 p.m. on February 13, an allegedly intoxicated female subject stole a vehicle outside of a HYATT hotel and drove it home. The subject informed police the next morning that she was in possession of a vehicle that was not hers. Samantha [Redacted], 22, of Arlington VA, was arrested and charged with grand theft auto. She was held on a $2000 unsecured bond.

Updated at 4:30 p.m. — Jeff Overand, an attorney for the suspect, says that Samantha was “involuntarily intoxicated and had been the victim of a sexual assault.” Police were called to a local hospital and took a report of a sexual assault Sunday evening, after the suspect was released from jail, ACPD confirmed after an inquiry from ARLnow.com. “That case is ongoing,” said Savage, the police spokeswoman. In light of this information, ARLnow.com has decided to redact the suspect’s last name.