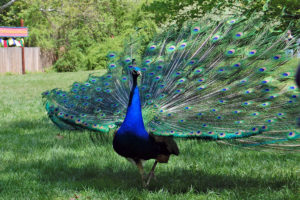 “Fowl running at large” is a local ordinance that doesn’t get used much nowadays, but it was enforced following an unusual incident near Columbia Pike over the weekend.

An animal control officer was called to an address on S. Barton Street on Saturday evening for a report of a runaway peacock. After a brief search, the officer found and captured the rogue peacock — and located its owner, who was issued a ticket for the aforementioned “fowl running at large” violation.

The peacock and its owner may have an even bigger problem than the “at large” charge, which is a misdemeanor punishable by a fine up to $100.

The Animal Welfare League of Arlington, which runs the animal control program, said they notified the county zoning department — which enforces the county’s prohibition on keeping fowl in most residential yards — about the incident.